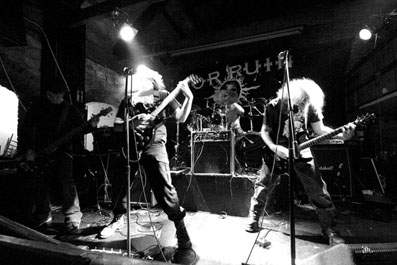 First formed in 2003 as a solo venture by John Murphy. But the first seeds were sown as far back as 1997/98 when John first wrote some of the initial material. In the early years it was pretty much a one man effort from John, although obviously some help on this debut demo came from Russell. The two following demo releases would be completely written, played and recorded by John until the first full line-up of the band was formed in late 2005.

After the MEICHE portion of the disk was recorded, Russell provided vocals on a couple of songs that John had written and recorded. He originally recorded vocals for four of the tracks but they felt it sounded too much like AT THE GATES so John had a go at providing vocals for some of the tracks. Two HYPOCRISY cover versions were also recorded as part of the FOR RUIN side of the demo. ‘Apocalypse’ and ‘Mind Corruption’ with the latter being tagged on the end as an unlisted hidden track.

Even though the demo was recorded in late 2003 / early 2004, it wasn’t released until later in 2004 after John had moved to Spain. Some of the tracks would eventually be re-recorded on the following two FOR RUIN demo releases, “Shade” and “Obsidian” in 2005/06,  as well as also being featured on the bands debut album ‘December’ released by Irish label Sentinel Records in late 2007. It was around the time of the “Obsidian” release that John recorded a series of cover versions. These were ‘Black Winter Day’ by AMORPHIS, ‘Brave’ by KATATONIA and ‘Pity the Sadness’ by PARADISE LOST, which subsequently were tagged onto the end of the Split demo for a second “DIY” print.

Their second album, “Last Light” was released in 2009 and their latest “Ater Angelus”(review…) in September 2013 which was preceeded by a digital EP, “Mortal” in August.

2014 saw the band playing shows around Ireland in support of the album including a spot at the 11th Siege Of Limerick ‘Earach 2014’ in April 2014. But soon after Pete Lawlor decided to move abroad and so announced his departure from the band. CORR MHÓNA and SOOTHSAYER bassist, Steven Quinn, then joined the FOR RUIN ranks as his replacement.

After another few years in hybernation, with Murphy focusing on other musical projects such as tribute acts LOST PARADISE and KATATONIK and their continuation as original act THE GRIEF, he used the COVID-19 lockdown and pandemic period to record and release new FOR RUIN material. The first being the digitally released “Elapse” EP in September 2020.