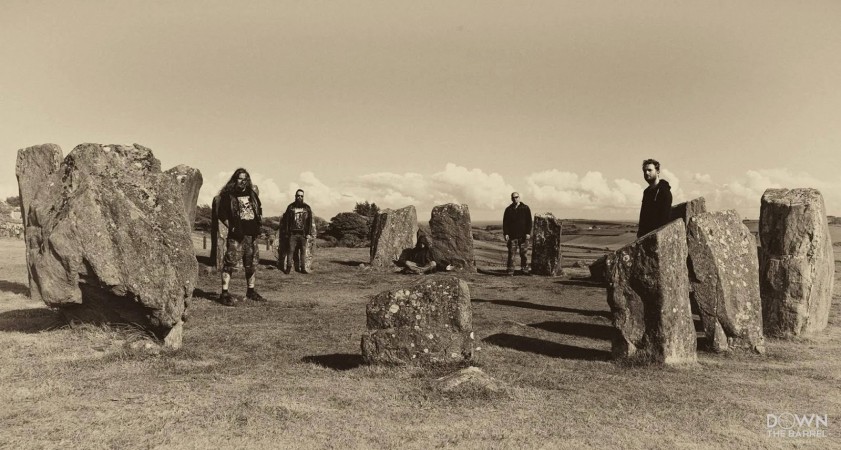 SOOTHSAYER are one of the current bands in Cork who have garnered much deserved praise and attention.

Like most bands evolving from previous endeavours, doom outfit SOOTHSAYER developed and honed their sound and style for the first couple of years, having first emerged in 2014 from the blackened and smouldering embers of ÍWERIÚ. They have noticeably improved with time to become a seriously impressive live act. Each song is lengthy, arduous and builds rhythmically into a heaving swell of riffs, topped off with an array of vocal effects from frontman Liam Hughes.

SOOTHSAYER‘s debut release was eagerly awaited here on the Archive, which finally saw the light of day as of the 24th October 2015. And “The Soothsayer” did not disappoint!!! Early 2016 saw bassist Steve Quinn leave the band, but not before laying down his final recordings for the bands second offering, the superb “At This Great Depth”. The vacant position was soon filled by Paval Rosa.

Early 2017 saw original drummer Will Fahey depart the band with Sean ‘Junior’ Breen taking over the position soon after.

As the year 2013 drew to a close, Soothsayer began to take form. Rising from the ashes of Doom-Noise merchants Íweriú – Hughes, Doyle and Fahey sought to continue within a bleak nightmare, fuelled by frustration and paranoia. Recruiting O’Grady and Quinn to join them, The Soothsayer was given life.

As the year 2014 began, Soothsayer made its first live appearance. Much of that year was spent honing their songs and sound, albeit with sporadic live performances, inflicting a Blackened, Doom-laden atmosphere upon all in their path.

Into the year 2015, Soothsayer entered a remote studio in rural Kerry to record their first demo. “The Soothsayer” was released later that year.

In 2016, the band recorded their second EP with Eamonn Coleman, who handle the recording, mixing and mastering, recording the EP, done live with minimal overdubs. Soon after, Quinn left to pursue other projects and Rosa came into the fold as the new bass player. Signing with Transcending Obscurity Records, “At This Great Depth” was released on December 30th 2016.

Now the band pushes forward, expanding their sound and vision, continuing their journey through a surreal and sepulchral mindscape.

“We are THE SOOTHSAYER…”