The UrbanJungle, despite its curious layout, seems to be a decent addition to Cork’s live venue location.  Having opened its doors to the heavier side of affairs when ZHORA kicked off back in July, they have had several more in the meantime.  The more options available, the better.  Considering the closures, and change in management policy at others, we can all hope that this is merely the beginning of it’s relationship.

Unfortunately, an unexpected delay, meant that I missed out on seeing rising local stars, SOOTHSAYER.  Attention has been growing ever since their self-titled demo release, and more so since their signing with Transcending Obscurity Records.  Release of their debut E.P is set to be towards the end of the year which should be a major event for the band.  I have seen them countless times at this stage but they are always worth the watch.  Especially to see what tricks new bassist, Pavol Rosa, can bring to the table.  Undoubtedly, they served up their usual blend of paranoia and despair.  Definitely hope to catch them at the Siege to make up for this. 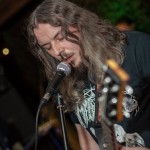 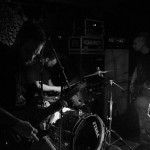 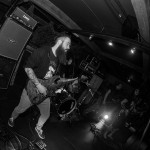 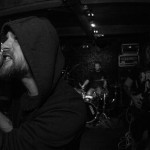 UNKINDNESS OF RAVENS are a band that I have heard much good things about previously but never had the chance to check out for myself.  They have been quite hectic in terms of live dates so far in 2016.  Indeed, they went as far as playing a festival in the Ukraine in July.  So obviously they are a band on the rise.  The five piece, combining two guitarists, a bassist, a drummer and keyboards, had just started when I arrived in the venue.  Danielle Egan on the keys was initially finding herself difficult to make her sound over the other players.  Thankfully, a quick adjustment managed to fix that and she was able to create a dramatic, soaring feel over the rest.

It might be the easy way to gain attention by merely replicating the swathes of female fronted retro-rockers but this is not the case here.  Darren Keegan reverses the trend by actually having a decent rock voice instead of the more pained and tortured vocals.  Because here it actually goes really well with their sound.  In a previous incarnation, they had been a stoner/southern rock styled outfit.  They still carry an element of that swagger and groove about them.  A lot of the tunes played are perhaps in preparation for their new release in 2017.  ‘Red Wine and Candlelight’ and ‘Bleeding Heart’ sound mightily impressive.  Keegan combines well with Shane Fitzgerald who unleashes some tasty solos.  Some of their lyrics do come across as somewhat corny (hair as black as the raven from ‘Deirdre of the Sorrows’) but this is a small complaint.  Applauds to them for coming down all the way down from up the country for this. 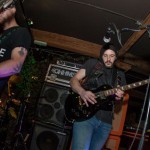 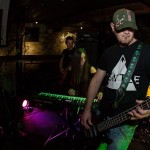 OHHMS first made their presence felt to this unsuspecting reviewer when I stumbled across their set at Temples Festival in 2015.  I, like many others, found transfixed by them and wanting to find out more by them.  For a band who have only been in operation since 2014, they have gathered a lot of attention.  It is easy to see why.  From the get go, the band are absolutely crushing in their approach.  They are also highly visual.  Bassist Chainy decides to rip his shirt off, spit on himself and come close to smacking someone with his instrument.  As much as it might seem like a close call, it never strikes as a deliberate action to intentionally hurt people.  Stand-in guitarist, Chester Boyd, also decides to get into the topless mode and swings his blonde dreads around constantly in flow to the music.  Meanwhile, lead vocalist Paul Waller, seems akin to a shaman in his attempts to exert control over the power being released.  All at once reminding me of the likes of Michael Gira, Damo Suzuki and Mark E. Smith.  Lead guitarist, Daniel Sargent attempts to scale the summit in terms of his soloing but also by clambering onto the stacks.  Max on drums is content to let the chaos continue around him while he crashes away.

To pigeonhole them as a doom metal band would be too easy.  At times they employ sections that recall the likes of The Melvins in terms of their mixture of distortion and fury.  To counter that intensity, they also had moments of pristine beauty.  Their prog rock influence also making itself heard.  Classic rock riffing also popped up in various areas.  When you hear that there current discography includes two E.P’s of two songs on both, you might imagine them to be short affairs.  Anything but.  They are gargantuan affairs that average around the 16 minute mark.  These sprawling affairs from ‘Bloom’ and ‘Cold’ managed to hook in many there present.

It seemed a pity then when they decided to finish up when they did.  Although Waller stated that Boyd only knew three songs, perhaps a cover of something or a jam session could have seen out the allocated time.  This was the only disappointing point of it all.  Hopefully, with either the release of a third E.P or the long awaited album, there will pay us a visit again.  The night was finished off with photos of members from all three bands there.  Kindred spirits in different ways. 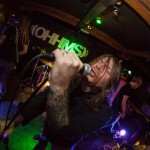 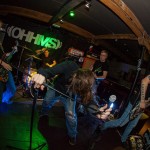 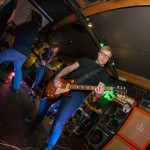 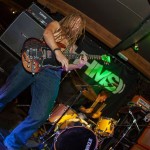 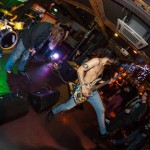