The live buzz from the mid-2000’s seems to be on the way back in Cork’s gigging scene once more and all across the musical board there looks to be an uptake and increase in live shows and new bands on the scene. The countries downturn back around 2008 took a huge toll on everyone and pretty much dessimated the metal scene in Cork. Only kept alive and tipping over by mere a handful of resiliant bands and individuals over the years.

But there’s life in the old dog yet! As is evident by the number of quality gigs that have been taking place in venues across the city such as Mr. Bradley’s on Barrack Street, the old stomping ground of Fred Zeppelins and the sparodic touring band rolling in to town to play Cyprus Avenue, The Pav or even The Savoy.

So here’s a brief, mixed bag, round-up of some of what’s in store around the city over the next while.
So do the right thing and be sure to get off your holes and check some of them out!!!   😉 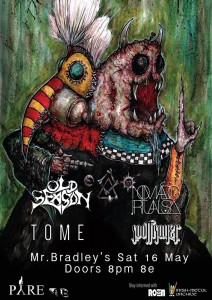 This weekend sees Cork’s Pyre Promotions host two of Belfast’s heaviest bands as they rumble into town on the 16th May and test the foundations in Bradley’s bar. Both TOME and NOMADIC RITUALS are on the road to support their latest self-released split 10″. An immense slab of intensely heavy sludge/doom that ‘is a dark and brooding crawl through their blackened musical world’ and ‘takes the listener on an unsettling trip through their thick bass filth’.

Joining them on this leg of the tour is Epic Irish Metal legends OLD SEASON. On the scene since 2002 OLD SEASON have been beavering away working on their next album and first with new vocalist John Bonham. 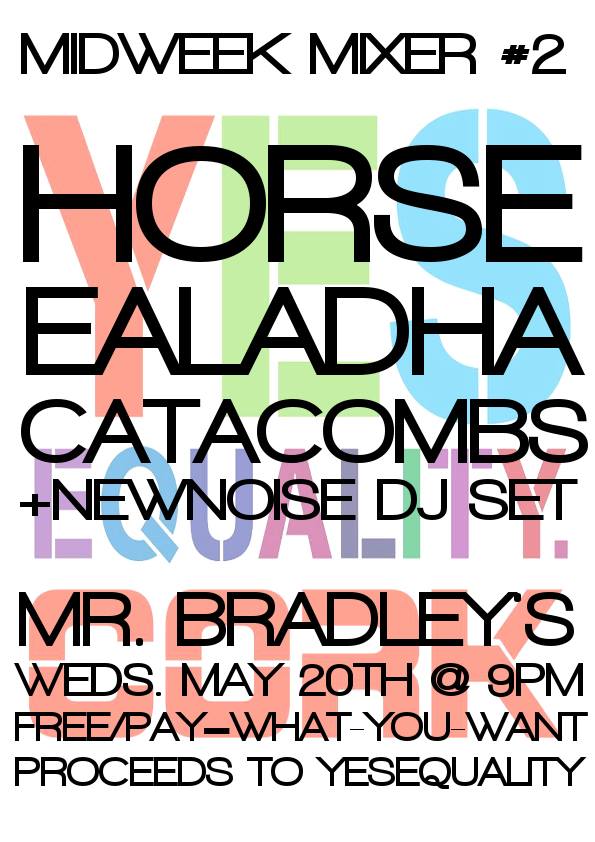 After a successful first outing, Midweek Mixer returns for a second round at Mr. Bradley’s on May 20th.

Headliners are Cork hardcore brutes HORSE, fresh off their recent excursion to the Siege of Limerick and the release of their first “Fünderland” EP.

Joining them will be rising ambient/post-metallers EALADHA, who have just released first single ‘Dive’, garnering national airplay and critical acclaim in the process. And new alternative-rock four-piece CATACOMBS.

All topped off with a DJ set from one of Cork’s alternative & independent-music cornerstones, Niamh Hegarty, with her first DJ set since her standard-setting New Noise night at the Quad in the mid-2000s.

And for the week that’s in it, all the proceeds from this free/pay-what-you-want show will go toward YESEquality as the campaign faces down the final days before the Marriage Equality Referendum on May 22nd. 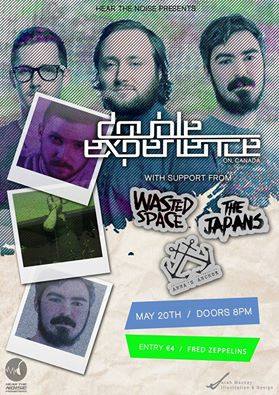 A musical multiplayer sensation with an undeniable DIY-ethic that has provided them with and robust international touring credentials and critical acclaim since 2011.
(https://www.youtube.com/watch?v=_64hxwk42cc)

Local support on the night comes from Cork’s own pop-punks WASTED SPACE… (https://www.youtube.com/watch?v=wWPQlIiCuBA)

The following night on Thursday, 21st May we have the good folks Mr. Bradleys Live presenting Cork’s kick-ass headliners SOOTHSAYER , who will host an evening of awesome riffage.

Joining them will be Sweden’s  HEADSTONED who are coming over to tear Ireland a new one, so lets join the mighty SOOTHSAYER and  show them how we like to do it here… “with much love, respect, and as always, serious craic!”

And not to be missed on the night will be local openers RAIN, who really impressed on their recent live outing as support to the mighty FIVE WILL DIE, so get in early and be sure not to miss out! 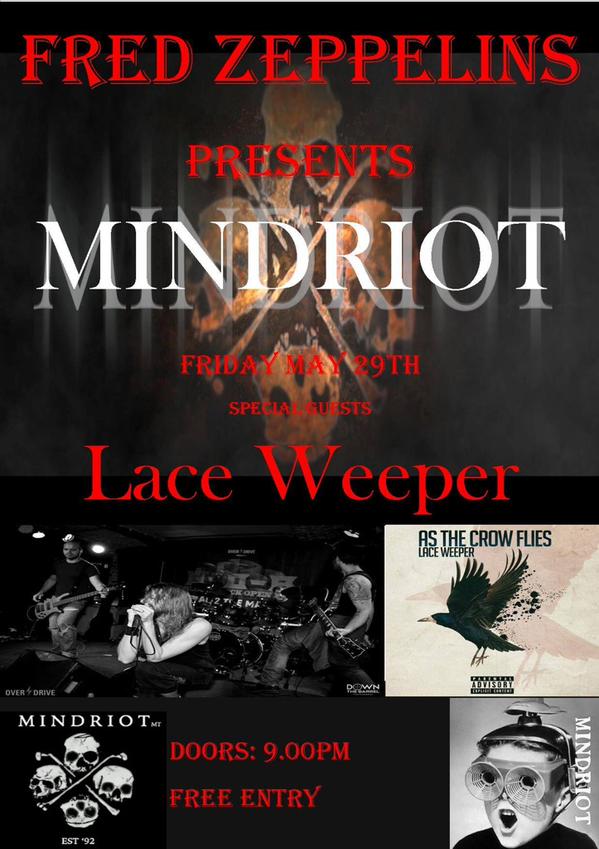 Fred Zeppelins is the spot once again on May 29th when Mitchelstown rockers MINDRIOT take to the stage. The first of a number of planned one-off shows ahead of their upcoming Indiependence 2015 appearance.

Knocking around in one form or another since 1992, with the band falling out, splitting up and eventually getting back together on more than one occasion! MINDRIOT are back and rocking once more with this latest incarnation having wiped the slate clean and are taking a fresh new approach to their music, as they support last years self-titled “Mindriot” EP and two new single tracks ‘Scream’ and ‘Runaway’.

Supporting the local lads will be grunge rockers LACE WEEPER, making the trip down from Dublin. Already with a series of singles and EP’s under their belt, LACE WEEPER have just recently released their debut full-length album “As The Crow Flies” which is out no on M&O Music, the band are eager to spread their music far and wide. 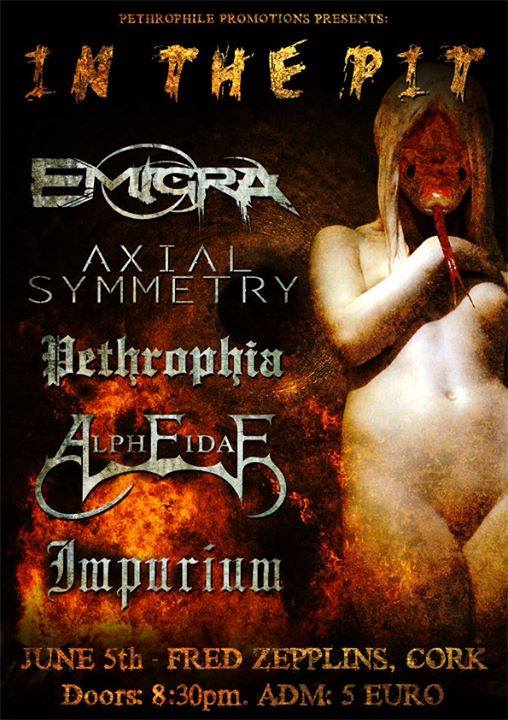 Which brings right up the the first week of June… And the first gig to be organised by Corks newest metal promotors. ‘In The Pit’ will feature five killer bands have been drafted in by the newly formed Pethrophile Promotions for their debut event, who’s aim is to simply aid in the long overdue revival of Metal in Cork. So let’s make sure it’s a success!!!

Headlining will be Cork veterans EMIGRA. A five-piece, multi-cultural hardcore/metal band consisting of Polish and Irish members. They will also be showcasing their new vocalist Xander Coughlan to the home crowd. Fellow Cork newcomers and death/thrashers PETHROPHIA will be joining them. As well as two of Dublin’s finest in the form of ALPHEIDAE and AXIAL SYMMETRY. With Waterford metalcore upstarts IMPURIUM making the trip over too.

This one it looks like its going to be fucking insane!!