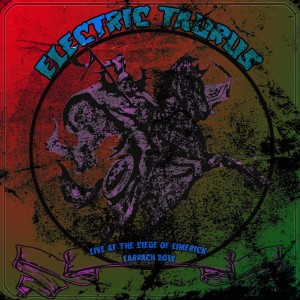 Last Easter Sunday saw Limerick once again bear witness to he mightiest of metal events to take place on Irish soil. The Siege Of Limerick – Earrach 2015. It may only appeal to the dedicated Underground Irish metal community. And it might not draw the larger crowds that some big name acts will attract in our nations Capital. But nonetheless… it’s a well established and much revered event that takes place not once, but twice a year and has consistantly excelled in promoting our local metal talents as well as playing host to many touring bands and notable headline acts.

The Earrach 2015 installment was no different. With Headliners SOLSTICE and THE WOUNDED KINGS being the main draw, along with a massive assortment of local Irish bands to bulk up the completed line-up. One such band is the incredible ELECTRIC TAURUS from Dublin, who have  been good enough to embrace the Irish Metal Archive’s live recording of their performance as their first official bootleg. Unlike most of the other sets recorded, this is room audio only. Due to some technical difficulties on my part (fatigue and too much alcohol…) the desk recording didn’t work out for this one unfortunately! But it still captures a great performance by an amazing live band.

So! Head on over to the ELECTRIC TAURUS bandcamp and show your support by downloading the full set and maybe throwing the band a few quid in appreciation…!!!

ELECTRIC TAURUS originally formed in 2010 as a recording project by Matt Cascianni before evolving into a full gigging band. After various member changes throughout 2010/2011, the line up settled down with Mauro Frison (ALTERNATIVE 4, CRUACHAN) on the drum stool. James Lynch stood in on bass for a time and was eventually announced as the bands full-time bassist. Matt then took up vocal duties and this formation started the recording of their first “Into The Sun” EP And in May 2012, ELECTRIC TAURUS was then offered a record deal for their first album by Italian indie label Moonlight Records. The album “Veneralia” was recorded in July and released leter that year.

The band is heavily influenced by both the giants of the 60s and 70s (BLACK SABBATH, HENDRIX, THE WHO, LED ZEPPELIN, etc…) and the underground bands of the same era (BUFFALO, LEAF HOUND, IRON CLAW,  and more). All this retro fuzz music is then blended with the 90s MONSTER MAGNET, SLEEP, KYUSS, ELECTRIC WIZARD and ORANGE GOBLIN. A strong blend of ’70 Heavy Blues with Doom and Stoner influences, tied up by stage improvistation.