Echoes Of The Earth by Soothsayer (Atmospheric Metal, 2021) 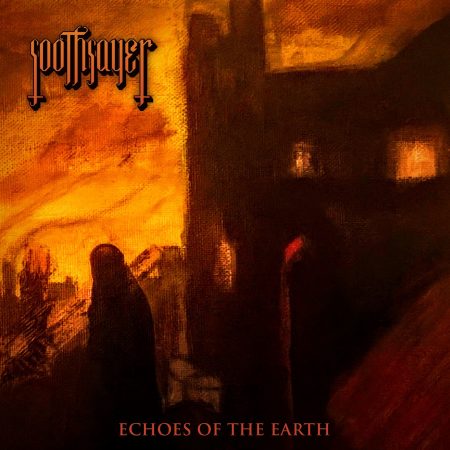 Recorded in the Spring of 2019 at Kitten Lane Studios in the city of Cork, Ireland.
Engineered by Aidan O’Mahony.
Produced by Pavol Rosa.
Mastered at Tower Studios by Brett Caldas-Lima.
Logo and Graphics by Marc O’Grady.
Artwork and Lyrics by Líam Hughes.

“Echoes of the Earth is an emotional accumulation of many years of frustration and despair. As we trudge through yet another dark period on our journey as a species, the ever-morphing head of the malevolent serpent continues to inflict nefariously upon us and push our spirits further down into an ever-darkening oubliette.
“At present, every single one of us on this planet are experiencing a trial filled with many nuanced types of pressures and frustrations. Some feel it from events occurring on the global scale while others feel it solely on a personal level. Either way, we are all feeling it.“We feel that we have been pushed beyond the fringe of what we recognize as being fertile ground for true progression. There is a want to reconnect with nature as with ourselves.“The artwork for Echoes of the Earth was created using no paint brushes. The only tools used were fallen Autumn leaves of Oak, Sycamore and Beech, as well as a broken twig, each provided by the Earth itself. These natural tools provided their essence in conveying the brooding, industrial atmosphere that stands in opposition to their very own natural urge to flourish… Fallen leaves convey their own despair, as does The Soothsayer.
“Outer Fringe is about harnessing that energy, the frustration and despair, and striking back at the serpent’s head to reclaim our space. Dying ecosystems, corrupt politicians and corporate faces, human beings living without food or shelter, unnatural animal extinction… This is not the way.
“We must emerge from our Outer Fringe and take the head of the serpent. Strike back…
“Wield the fires of Mars.
“We are The Soothsayer.”