9:30 I was told the nights proceedings were set to kick off! So 9:30 on the button I strolled in the door to Bradleys to be greeted with the Cork’s purveyors of Doom, the mighty SOOTHSAYER finishing off their set-up and preparing to kick things off with their take on the Doom genre. The words “We are the SOOTHSAYER…” seeps out of the PA with echo and effects to harken the impending swathe of riffs from the local band. 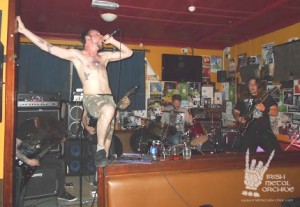 The first song went smoothly enough, but some technical difficulties soon crept in to the set. Liam Hughes mic packs in at one point so he robs one of the others backing mics. And guitarist Con Doyle had some problems and had to change guitars early on leaving the others to take up the slack for a while, not that it even phased them. I’m not certain if it’s something the band had worked on previously or just came up with on the spot, but Hughes repeats the sets opening mantra, “We Are The SOOTHSAYER…” and set it on an echoed loop through his magic box of mic effects to which bassist Stephen Quinn quickly pounced on, followed by the remaining members to occupy the downtime with a rather tasty instrumental. On with the show (and Doyle) and everything is back on track again as the band play a tight set with heavy riffs complimented with plenty of melodic lead guitar. SOOTHSAYER have yet to record a proper release and after the set they delivered tonight, I for one am eagerly awaiting it. 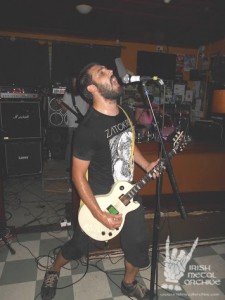 Next on the bill are Cork regulars FIVE WILL DIE who have been accompanying the headliners on their latest trek around Ireland. Being one of the hardest working, consistant and unwavering bands in Ireland for almost ten years now, it’s impossible to fault FIVE WILL DIE whose commitment to the Irish scene has to commended. I made the mistake of heading out front after SOOTHSAYER only to arrive back inside to a packed room which I had to maneuver through to get a decent vantage point. Alan Setter on drums and Colin Crowley on bass were on stage but rather than limit themselves to the confines of the cramped area, guitarists Alex Hayes and Daniel Howard had set up on the floor in front of the gathered crowd (a common occurance in Bradley’s), while Andy Forrestal and his impressive beard barked and bellowed directly into the front row.

Between songs they tried to keep straight faces as former bassist ‘Bagacans’ Barry heckling them relentlessly! Thankfully he remained fully clothed! Always an impressive band to watch live, FIVE WILL DIE weaved their way through tracks from both their albums, while taking the crowd through moments of crushing heaviness to calm serenity and back again before finishing off their set with their newest offering ‘Altar Of The Void’. A slow burner with a gradual build into an obliterating climax.

ZATOKREV were making their very anticipated return to Cork, as the packed room acknowledges. The band follow FIVE WILL DIE‘s lead and split the band between the stage and the floor and within minutes frontman, Frederyk Rotter is dripping in sweat and spit as the band unleash their brand of furious apocalyptic sludge metal on the packed venue. It’s an impressive display from the all members as they charge through the set at a manic pace. And then… just to fuck with your head they sink into a lengthy period of noise and feedback. Probably to catch their breathe as much as anything else. And while all this is going on, Rotter decides to take a stroll through the crowd greeting friends and fans on his way only to re-emerge from the front bar and belt out vocals on top of his lungs without the aid if a mic. Eventually he does make it back to the front of the venue and continues his unplugged vocal attack before finally picking up his guitar blasting into the fury once more. 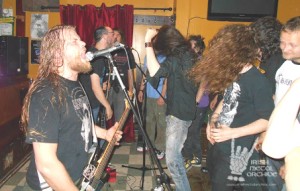 Now! One such diversion is fair enough, but after this second barrage heavy tracks the band relapses into another prolonged noise and feedback as each member actually attempts to murder and dismantle their instruments. Guitars are abused relentlessly to keep the noise going, being kicked, hit, dragged across furniture and strings literally ripped from them while distortion peddles are given similar treatment. It’s an impressive display, but if I’m being honest, they wore it out long before they finally ended it.

Regardless, though! A thoroughly enjoyable gig by all accounts. And hopefully another return visit from the Swizz noise-mongers will be on the cards.