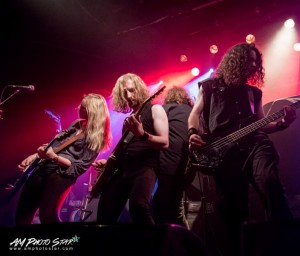 13th August was the day the beards rolled into town via the long boats docked along the Liffey. If the beards weren’t enough for you the sight of 300 grown men with long hair and not forgetting the very sexy ladies there too queuing up to get in made for some people to cross the street.

However first we had DARKEST ERA to attend to and what a band they proved to be. With tight sounds and crushing guitars, these guys made it worthwhile for those who took the time to see them. With their blend of Celtic sounds and heavy riffs DARKEST ERA are not only amazing live, but also guaranteed future stars of the Irish metal scene. Make sure you take the time to check them out on one of the dates on their upcoming UK/Irish tour in October this year. 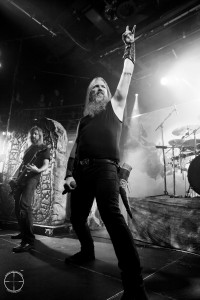 With a stage set up that includes two rune stones, AMON AMARTH made sure we were in for a treat and delivered a tight set that saw everyone have a good night. Even the random OAP who was there, not by mistake, but by choice. He knew every song and he was happy to pose with people for photos.

Johan was on fine form tonight and the smile across his face summed up how we all felt about the gig. And seemed to be much more relaxed this time too with his between song banter being kept to a minimum. The band made sure that the songs came fast and furious and with their set list at nearly two hours long, it was definitely money well spent for two great bands. A lot of bands who play the Academy could learn a thing or two from AMON AMARTH and DARKEST ERA.

Two tight sets from two amazing live bands made this a night to remember with the sight of many boarding their long boats with their drinking horns held high into the sky. Odin was a proud father that night.

Photos courtesy of…
AM Photo Star and
Down The Barrell Photography