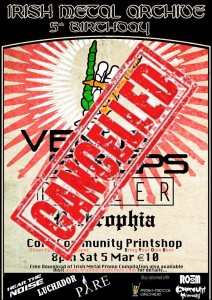 First off! The bad news…
Unfortunately, VENUS SLEEPS drummer Fergal Malone has seriously injured his shoulder and collar bone and the band are unable to perform at the Cork Community Print Shop this Saturday the 5th March. So it is with a heavy heart that we have decided to cancel the gig. The timing obviously sucks ass! And I would like to apologies to everyone who was intending to be there and were looking forward to the gig as much as I was. But there is no way around it at this late stage. Here’s hoping Fergal makes a speedy recovery and gets back in the drum stool sooner rather than later. All going well the band will be back to full fighting fitness for their return to Cork this coming May Bank Holiday Weekend, again in the Print Shop.

It’s particularly gutting for me personally! As Cork is Irish Metal Archive’s home turf and this show was essentially the beginning of the 5th Birthday gigs, as it was Shane Horan at Pyre Promotions who came up with the initial idea and got the ball rolling on the whole thing. And all the signs and indications were pointing to it being a very special night, indeed.

I’d like to thank all the bands involved for their support and give my apologies for the late cancellation. BAILER and PETHROPHIA are two of the most reliable and hard working bands in Cork and I will do my utmost to make it up to both of you.

It’s not a total loss for Cork this weekend, though!
Our Galway IMA gig line-up, featuring FROM THE BOGS OF AUGHISHKA, SOOTHSAYER and CORR MHÓNA, will be playing in Fred Zeppelins the night before on Friday the 4th March. And will make a more than worthy substitute for anyone itching for night of metal.

And we still have the final Birthday gig coming up the following week, also in Fedz, featuring  XEROSUN, ASTRALNAUT, PARTHOLÓN, VENDETTA LOVE and UNKINDNESS OF RAVENS. So be sure to get your hoops along to that one!

All the rest of the planned events up in Limerick, Galway and Enniskillen are still going ahead. Henchman Promotions in EnnisKILLen have black metallers DRAKONIS from Lisburn headlining the night in Charlie’s Bar on Friday the 4th March with support coming from local alt-metal band ATTACK THE DAY and Belfast death/thrashers WARDOMIZED.

This Saturday the March 5th still has NO MANS LAND, THE MAGNAPINNA, PARTHOLÓN and BEYOND TRANSCENDANCE all taking the stage at the Kasbah Social Club in Limerick.

And Feast Promotions & Hexen Haus in Galway’s will see noise/drone group FROM THE BOGS OF AUGHISHKA, CORR MHÓNA, SOOTHSAYER and WEED PRIEST making some serious noise at the Róisín Dubh.