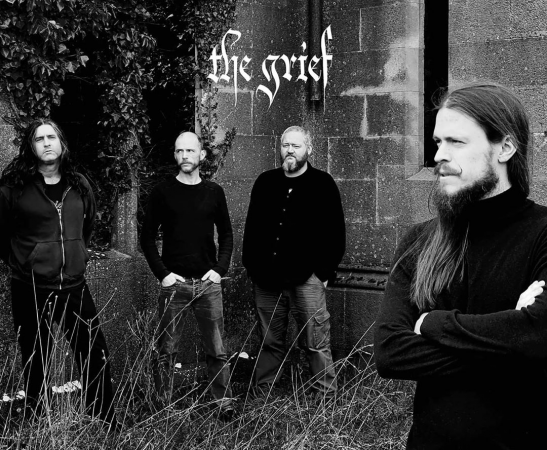 THE GRIEF is a doom metal band based in Cork, featuring members of CORR MHÓNA and FOR RUIN.  Formed in January 2016 after the completion of the KATATONIA tribute act KATATONIK, the band chose to start a new original band to continue in the gothic/doom style with with influences from all the aforementioned bands.

With 10 songs completed THE GRIEF made their live debut in early 2017 before recording an initial unreleased demo with the original line up of the band: Robert Farrow – Drums, Kieran O’Leary – Bass, Paul Quinn – Guitars, Stephen Quinn – Vocals, John Murphy – Guitars.

With the drum position vacated by Farrow who has since moved abroad, the band decided to focus on recording their first 9 songs during 2019 at Murphy’s home studio in North Cork. Recordings were completed in late 2019 with Murphy performing the drum parts while a new drummer was being recruited.

The 9 songs have been mastered by Dan Swano at Unisound (www.unisound.se) in January 2020 and the band plans to release the material digitally via a number of releases during 2020, with their debut digital single ‘A New Dawn’ being released in early February 2020 on Spotify and Youtube, with the bands debut digital EP “Ascent” released in late February and it’s follow up “Descent” releases in late October 2020. SOOTHSAYER guitarist/vocalist Con Doyle joined the band on drums shortly after the debut “Ascent” was released.