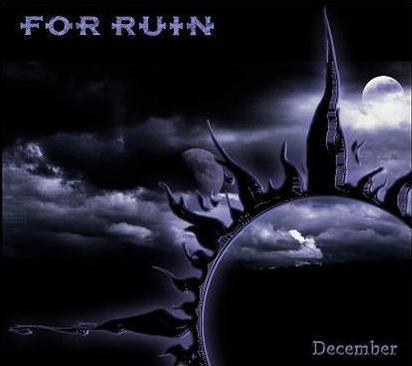 Recorded at The Belfry and Secret Garden, March – May 2007.

“December 2021” – A fully remixed & remastered edition of the 2007 FOR RUIN debut album “December” is available on limited Digipak CD (via Bandcamp & Sentinel Records) and through all streaming services from Dec 2, 2021. The album features the 10 songs that featured on the original 2007 album along with 5 previously unreleased bonus tracks recorded by the band during the 2007 recording sessions.
Some of these bonus tracks were re-recorded by the “Last Light” lineup for that album (in 2009).
“December” is the band’s debut album and was originally released on September 15, 2007. The album contains many of the songs that featured on the band’s 3 demo releases but performed by the English / O’ Sullivan / Myers / Murphy lineup of the band at that time. The album was recorded during March-May of 2007 but the production of the album was never what the band had wanted as it masked the quality of the songs. In the summer of 2021, Murphy began the process of remixing the album. All of the original 2007 performances have been preserved for this remix and some additional guitar & new vocal/synth parts were recorded to strengthen the mix, before being mastered by Marko Tervonen at Studio MT in Sweden.