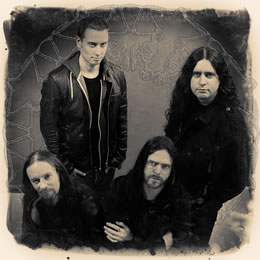 FOR RUIN have well established themselves in the Irish metal scene at this stage with a number of impressive demos and equally impressive (although poorly produced) debut album. But it was their second ‘Last Light’ album that really displayed the bands potential. Great songs and a vastly improved production really showed off what FOR RUIN had to offer and the full band dynamic became more apparent on this release as opposed to the one-man project that was the bands beginning.

So now! Four years after that sophomore release the band have delivered their 3rd album ‘Ater Angelus’. The first tastes of these tracks were sampled back in 2011 when a number of tracks were demoed, a couple of which found their way on to the internet via Youtube and podcasts. So these tracks have been doing the rounds for a while now. The whole album was even demoed in full early in 2013 year, so obviously the band were determined to iron out as many creases as possible before hitting the studio to record the end product.

The first thing that becomes clear is that there’s more of an eagerness and energy to the music. As if they’ve taken a step back with the writing to explore a slightly more primitive style than before. ‘The Grand Design’ for example is one of the more straight-forward and heaviest songs the band has recorded and sure to be live staple, I hope! The melodies and superb guitar harmonies are still there in spades, just now with a touch more aggressiveness and vigor. It’s a contradiction that runs through the entire album. Take ‘Ad Astra’ with its straight for the jugular opening before settling back into melodic, harmonised guitars or ‘Absentia’ with its almost mournful intro and harmony leads as well as blistering riffs.

The second thing that really hits home with this release is that the production this time round is noticeably rawer than the previous albums more crisp and polished finish. And maybe that was the intention this time around. But the music really deserves a quality production. Where the band certainly does excel is with the guitar work and as mentioned before the riffs and harmonies are pure quality. Bass and drum work throughout is excellent, although that being said the production does make them come across as a little flat at times with the guitars taking centre stage throughout the album. A recurring problem that the band has had for all their releases. My only other real gripe is that I feel John Murphy’s vocals don’t really hit the mark. Again! Not just with this release, unfortunately, but in general! There’s no denying he can growl… It’s just that he seems far too low in the mix for the most part. However, on stage he delivers and I can’t fault him.

So! Yet another very good album by the band. I just can’t help but think that given the quality of the song writing and the musicianship a different approach to the lead vocals could benefit the band hugely. And maybe let go of the reigns a bit more and let someone else call the shots in the studio.