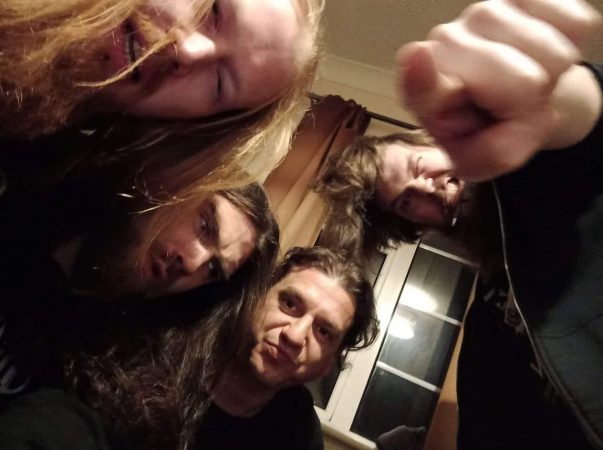 The band was originally formed by brothers, Michael and Sean Sullivan, as AUDITORY SHRAPNEL. I don’t know if there was a full line-up at this stage, but some demos did surface online, ‘Harmony Through Aggression’ being one as well as a version of ‘Godes Andsaca’, but have now been removed.

Ragas left TEN TON SLUG with Eoghan Wynne taking over on bass. And on vocals the band recruited NA CRUITHNE guitarist, Ronan O ‘hArrachtain. Their first official release, the two track “Live At The Oaks” demo was released in September 2015.

Based in Galway and originally from the depths of Connemara in the west of Ireland, Ten Ton Slug has ingested five humans and leaves a trail of groove-laden sludge metal in its wake.

The Slug has been steadily gathering momentum, building an ever increasing fan-base and reputation across Ireland and the British Isles over the past few years, embarking on a number of mini-tours through England, Scotland and Ireland with prominent underground bands. Performances at Bloodstock 2016, support slots with CROWBAR on the full Irish leg of their UK tour in March 2017 and slots with touring bands in Ireland and abroad such as SOLSTAFIR, DREAD SOVEREIGN, OHHMS, SLABDRAGGER, PLANET OF ZEUS, MAGE, RAMAGE INC. and many others have cemented their live reputation as a tight, hard-working and driven band.

Three releases over the past three years; “Live at the Oaks” in 2015, “Brutal Gluttonous Beast” in 2016 and most recently a limited edition CD run of “Live at the Siege of Limerick” in July 2017, which sold out in 24 hours, have all been extremely well received by both audiences and critics alike. The band continue to build on this momentum with the release of their second studio EP “Blood and Slime” on October 31st, 2017.

The Slug continued working hard with more shows throughout Ireland and the UK during 2017 and 2018, including a full UK tour and a slot at Manorfest in the UK with EVILE, MEMORIAM, XENTRIX and many others.

In February 2019 the band announced the departure of Eoghan Wynne from the band and welcomed Pavol Rosa (also of SOOTHSAYER and ZHI REN) as their new bass player. Rosa is no stranger to the Slug camp having already stood in on bass for the Slug at the Siege of Limerick and at MetalDays 2018. He makes his official live debut as a full time Slug member at Urban Assault Fest 2019 in Cork on the 23rd February.

“The Slug is hungry… The Slug shows no mercy.”