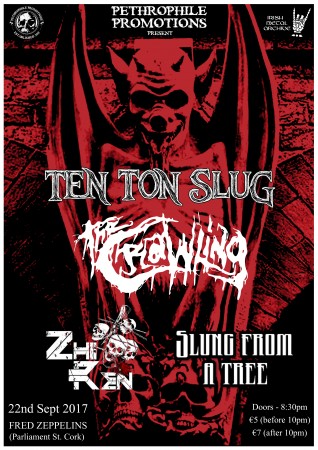 Pethrophile Promotions with the Irish Metal Archive presents to you…

The return of Galway’s masters of slime and sludge!
The mightiest gastropod mollusc of them all… TEN TON SLUG!
Following in their giant sticky trail will be none other than Belfast’s most miserable… THE CRAWLING!
Mayhem and gratuitous showings of man-flesh will also be on display with the addition of Cork’s latest musical disturbance… ZHI REN!
And to welcome all the early revellers to our altar of riffage, pouring down from the depths of Kerry and Limerick, we present an assault of low end drudgery from SLUNG FROM A TREE!

Based in Galway and originally from the depths of Connemara in the west of Ireland, Ten Ton Slug has ingested five humans and leaves a trail of groove-laden sludge metal in its wake.
Gigging started in early 2014 and the band released a live demo ‘Live at the Oaks’ in September 2015, followed by a very well received debut EP ‘Brutal Gluttonous Beast’ in October 2016.
The Slug has worked hard, building a reputation for delivering formidable live performances and has gigged extensively, supporting bands such as Ohhms, Planet of Zeus and Slabdragger and most recently securing a support slot with Crowbar for both of their Irish shows. In addition to this, Ten Ton Slug won the Metal 2 the Masses Ireland competition in May 2016 and played to a packed New Blood Stage at Bloodstock Festival in the UK.
The band are hard at work writing new material for release in 2017, alongside being booked for a number of shows across the UK and Ireland commencing in early March, with more Irish, UK and European gigs in the works for later in the year.

One of Cork’s more recent additions to the metal scene is ZHI REN, featuring current and former members of other notable acts such as SOOTHSAYER, PETHROPHIA, INHALE THE FALL and ARTFUL RENEGADE

“Spawned in the depths of West Cork, ZHI REN have emerged from winter’s cold embrace to impart onto you the fruits of their frigid seclusion. The newly formed four piece are shedding the skin from past genres, creating a sonance that will take you through their twisted world.

Elephantine riffs and stygian darkness, with a groove as deep as the abyss. Amidst the wailing guitars and guttural vocals you will be sheathed in a disturbing ambience that will linger with you in the darkest shadows.”

Stoner, Sludge, Heft from the depth of Kerry and Limerick.
No more to be said!!!

This event took place on Friday, 22nd September 2017 at Fred Zeppelins, Cork .
If you have any video links or photos, feel free to share them below.