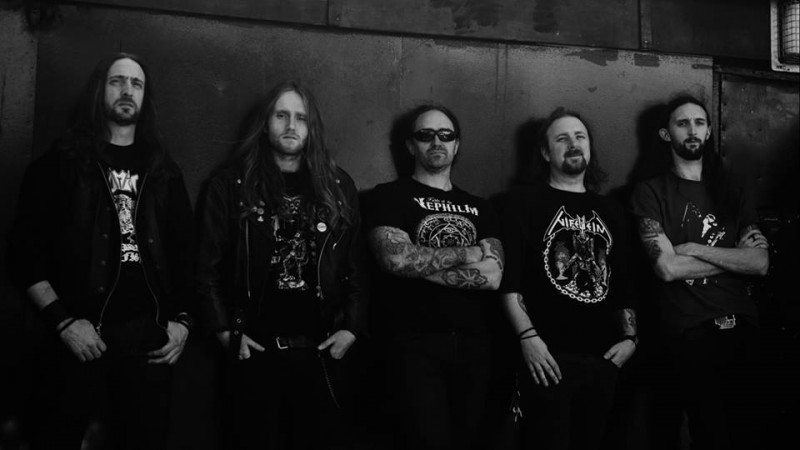 The name VIRCOLAC is derived from the Romanian word for ‘werewolf’.

VIRCOLAC are an Irish metal group with members who have all served in various other notable bands down through the years. Darragh, the bands vocalist has been rooted in the Irish and international metal scenes since the 1990’s, running his own Invictus Productions label and was also vocalist for the mighty SOL AXIS. Colin Purcell AKA ‘Necrohammer’ also served behind the kit with SOL AXIS as well as host of other bands such as CRUACHAN, DREAMSFEAR, KINGDOM and LUNAR GATE. Bassist Karen Bobaron, who also served in the brilliant WIZARDS OF FIRETOP MOUNTAIN as well as CAT PISS BRAIN ROT and formerly DE NOVISSIMIS. And the bands guitarist and main song writer, Jamie Grimes who has been involved with the likes of DRAINLAND, DE NOVISSIMIS, LURCH and too many others to list them all…

There was an earlier attempt to get the project off the ground back around 2010 under a different name, which involved JG, NH and Laoraighe also, but never fully developed. But it wasn’t until the end of 2013 before VIRCOLAC finally made a proper start. They recorded their debut ‘Codex Perfida’ EP in Sun Studios on September 26/27/28 with Ola Ersfjord handling engineering and production duties. And the band launched their live assault as part of Redemption Festival 2015 alongside PRIMORDIAL.

The band have since released an EP titled “The Cursed Travails Of The Demeter” in 2016 and a full length album, “Masque” in 2019. Line-up changes saw Brendan McConnell joining on guitars in 2015. And eventually both Karen and Jaime left the band with Jason Keane joining the band on bass in 2017. Diego Rodrigues (SACRILEGIA, AXIAL SYMMETRY) has also stepped into the drum stool for live shows on occasions when Purcell hasn’t been available to play.