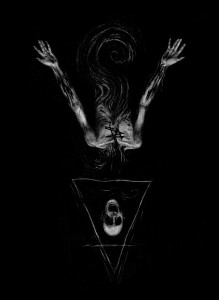 For those unfamiliar with VIRCOLAC comes from the Romanian word for “werewolf”. While the band formed towards the end of 2013, their members are by no means novices in the Irish metal scene. The bands vocalist Laoghaire is the man behind Invictus Productions, working closely with bands from both Ireland and abroad. He was also the vocalist for the highly respected SOL AXIS. Drummer NH was also behind the kit for SOL AXIS and CRUACHAN to name but a few. Bassist K also serves in THE WIZARDS OF FIRETOP MOUNTAIN and CAT PISS BRAIN ROT and previously DE NOVISSIMIS, as did guitarist JG. This is a band with pedigree and it shows on their debut “Codex Perfida” cassette released late 2014 via Iron Bonehead Productions.

The EP starts off with the instrumental title track. A slow eerie repetition of notes that conjures a dark atmosphere in the mind of the listener which culminates in a silence before the following track, leaving space for the listener to think what will unfold in the remaining three offerings. “Confessio” is an entirely different affair. A lengthy track that starts off as a series of intoxicating and aggressive Death Metal riffs, before completely slowing down just after the half-way mark. This could very easily have been an unsuccessful point in the track, but if anything I find this section to be mesmerising and compliments the “Codex Perfida” intro perfectly. VIRCOLAC combine the aggressive nature of death metal and atmospheric elements to devastating effect.

“The Worms Turns” starts off with a clean section accompanied by clean spoken vocals, getting increasingly faster and heavier until it enters a more traditional style of Death Metal. The EP’s closer “Effigy” is my personal favourite, though. Much heavier, faster and aggressive than the rest of the EP with more than a hint of MORBID ANGEL coming through on it. And during it’s final throes the band take you on another disturbing and bleak detour. This is a band that knows how to create dark atmospheric Death Metal from the beyond and a truly memorable EP.

For those without a cassette player, DARK DESCENT RECORDS will be releasing a CD edition of “Codex Perfida”, due for release after the band play the ‘Chaos Descends Festival’ in Germany on the 17/18 July, 2015.