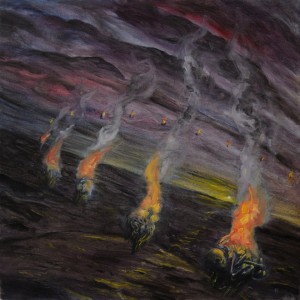 “The power of population is so superior to the power of
the earth to produce subsistence for man, that premature
death must insome shape or other visit the human race.”
—Malthus T.R. 1798

This Dublin based band that is a harrowing cacophony of elements of Black/Death/Doom have been on the scene since 2013. MALTHUSIAN have real talent from the Irish metal scene amongst the ranks, having members which feature in WRECK OF THE HESPERUS, MOURNING BELOVETH, ALTAR OF PLAGUES, ON PAIN OF DEATH and so on. Since the release of “MMXII” in November 2013, the quartet have been gaining ground both at home and abroad with support slots for PRIMORDIAL, BEHEMOTH, ALTAR OF PLAGUES as well as being the main act for Invictus Production’s ‘An Era Of Satan Rising’. And they were also the main support for NEGATIVE PLANE‘s recent European tour, which kicked off on the 15th of July at the Voodoo Lounge in dublin.

“Below The Hengiform” was released on the 06/04/2015 via Invictus Production on CD format and certainly feels like it is a natural progression from the brilliant “MMXII”. Firstly, the presentation of the CD slipcase with the MALTHUSIAN logo the main focus of attention and then you slip it off to reveal the brilliant artwork by Timo Ketola. The three track EP kicks off with “The Gasless Billows”, which starts off slowly and eerily, then gradually picks up pace with some very interesting riffs and sections after which the three pronged vocal attack of MALTHUSIAN comes in. There is so many brilliant changes in this song, everything from the instruments to vocals that just meld together, from sections where it’s classic bang your head Death Metal to some areas that have quirky shifts to sections where I enter a trance like state.

“Slouching Equinox” starts off much more chaotically than the previous opener, with some very nice bass before slowing down the pace. But then nothing stays calm with these guys for long and the chaos is back. The track slows down again around the five minute mark, but even when these lads shift from the chaotic, relentless assault they retain the utterly sinister quality of their sound. “Forms Become Vapour” is the final, and shortest offering on the EP and is easily the most aggressive sounding, with this one riff around the 2:38 mark that I find particularly infectious.

I’ve not mentioned any bands in comparison as I believe them to have a sound entirely of their own, which is to their credit and quite unique in the current metal underground.