Ever since MALTHUSIAN and ZOM played the Cork Community Print Shop in May 2014, I’ve been looking forward to returning to this intimate venue for a metal gig and what a better return than to see Ireland’s VIRCOLAC and DREAD SOVEREIGN. The atmosphere at this venue is great, with such a limited crowd due to the restricted capacity, its BYOB policy for those that drink and the Art gallery for a gander it’s got something for everyone to keep themselves occupied before the bands begin. I just hope more death/black/doom arrives back in the Print Shop soon, as it is my favourite venue in Cork to see such a gig and the bands last Saturday certainly did not disappoint…

After the cancellation of their previous intended visit, VIRCOLAC promised to make up for it, which they did with the quick announcement of this gig not long after. This was my 3rd time seeing them, and my 1st time seeing them Lee-side and with a new band member, guitarist BMC, also in tow adding a fresh new dynamic to bands sound and performance. Even though I’m familiar with their set now, I have to say this was my favourite show of the three times I’ve seen them. The sound and the intimate setting was great. And the delivery of the songs by the band was energetic and flawless. Frontman Laoghaire spent the entire set right in the faces of the front row while his band members occupied the small stage area behind, with guitarist Jaime Grimes relentlessly headbanging along to his furious riffing. This is exactly what you want from Death Metal. Even though this was BMC’s first live show with VIRCOLAC there wasn’t any teething problems. Closing track “Effigy” was a personal highlight of their set. 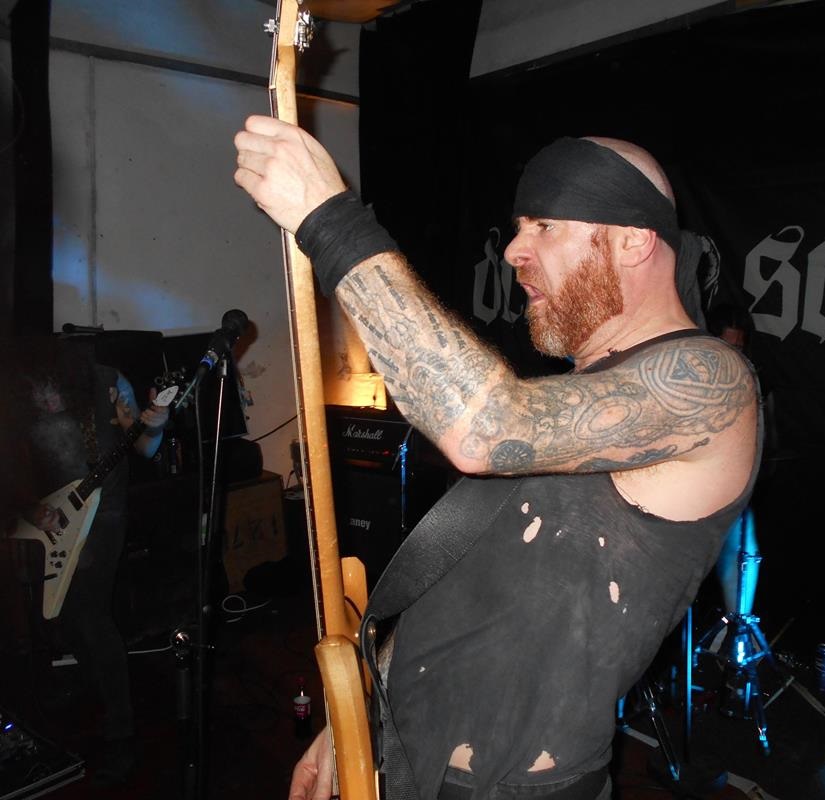 I also recently saw tonight’s headliners DREAD SOVEREIGN at the Voodoo Lounge, and although in my opinion they suffered from poor sound on that occasion, tonight was a much better showing from the band. I’m still not completely sold on some sections of the music, in regards to length and speed of certain tracks but it is growing on me. AA Nemtheanga and Co. didn’t let the size of the stage hamper their movement. Especially the charismatic frontman, who has been involved in the metal scene since the early 90’s and knows how to work an audience, interacting with the crowd often and getting up close and personal at every opportunity. While Nemthanga may be the bands primary weapon, guitarist Bones was fantastic throughout, laying out an impressive array of riffs and his signature solos. And there was plenty of headbanging going on during their set which was pleasing to see, and once again featured a gritty cover of HELLHAMMER‘s “Third Of The Storms”.

While tonight I was mainly their to see VIRCOLAC again, DREAD SOVEREIGN are a band I needed to to warm to a bit more. We all have that band that takes time to sink in, and they are without doubt growing on me with their performance tonight going a long way to doing just that. All in all, a great night at the Cork Community Print Shop.

Lets hope it’s not too long before its next metal gig.