This will be a fairly brief account of the night, as unfortunately, the Fates conspired against me and I barely made it in to catch the headliners. So to SLOMATICS and VENUS SLEEPS I extend my apologies for being unable to catch your sets. 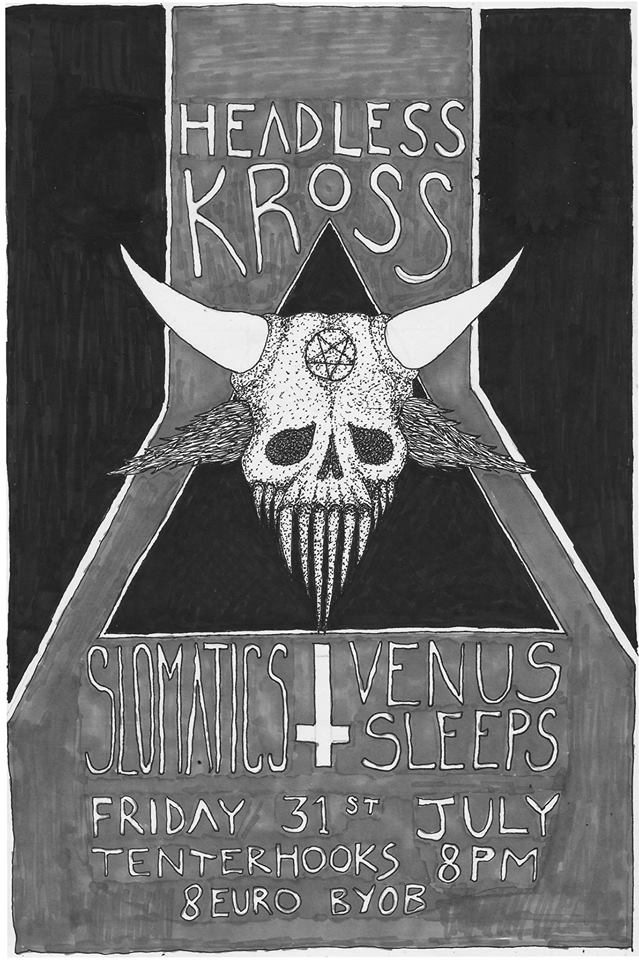 Now! I’ll admit to pretty much not knowing anything about HEADLESS KROSS prior to this gig. But I did have a quick run through some of their existing output to prepare myself. But it’s on stage is where a band such as HEADLESS KROSS can only truly be gauged. And with such a ‘different’ choice of a venue for the band to play on a Friday night, outside the City Centre, it seemed to only add to the mystique of HEADLESS KROSS.

Having previously only releasing a number of splits and EPs, the band took to the stage in support of their latest album “Volumes”, released earlier this year. And with such a strong back catalogue to play from they didn’t waste any time in unleashing their heavy psychedelic doom sound upon the intimate crowd. This trio plays like a five piece, with a focused and sheer determination to simply destroy your inner ears. It’s plain to see why these guys are becoming a serious force in heavy doom circles. Playing like psychedelic demons of doom, HEADLESS KROSS take you on a journey where nothing is safe. Displaying musicianship that would have the great Tony Iommi nodding in approval, it was a great pleasure to see such an amazing band play live.

Hopefully there will be a swift return of the Scottish Kings of psych doom to these shores.

Keep it up lads!