Metal! Heavy metal in particular, a genre that lost all virility and popularity in the 90’s has, in more recent years, grown in numbers and strength due not only to the the re-emergence of bands once lost, such as ANGEL WITCH, SATAN and HELL (to name a few), but the influence that these bands and their more popular counterparts hold on today’s breed of metal band. ENFORCER, PORTRAIT, CAULDRON, SKULL-FIST, EVIL SURVIVES, WHITE WIZZARD… and it’s truly electrifying to see a genre revitalized after the crushing blow dealt by the almighty ‘Grunge’ and ‘Nu-Metal’ in decades past.

The Kildare quartet have not only delivered the goods in terms of creating an astonishing debut in “Nasty By Nature”, but have raised the bar of heavy metal standards in today’s Irish scene. Not content with merely aping their 80’s metallic heroes, STEREO NASTY offer an authenticity that so many of today’s traditional metal acts fail in achieving, yet stay true to to themselves and their passion for 80’s inspired Heavy Metal. This is evident from taking just one look at album cover for “Nasty By Nature”. Gone is the overused Maiden-esque font, to be replaced with a video game/arcade style logo. Gone also is the familiar graphic musings of Ed Repka, Derek Riggs and Brian Schroeder to be replaced by a vivid horror, video nasty movie style image of a femme-fatale (think ‘Maniac Cop’, ‘Don’t Go Into The Woods’ or ‘Deadly Friend’ and you’re on the right track) in glorious 80’s attire who’s gearing up to lethally seduce some wall street yuppies behind a neon lit rock club to the sounds of ARMOURED SAINT. All in all the whole package screams originality. 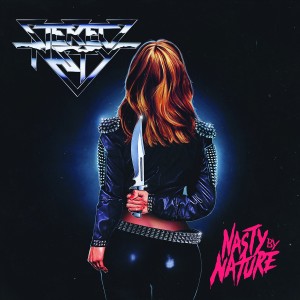 A pre-production demo of ‘Black Widow’ had been streaming for the last few months as a means to whet the appetites of the bands fledgling fanbase and entice new listeners. So it’s no surprise to have the final album version of this track kick things off. Right from opening feedback intro and that killer riff, you know you’re in safe hands for the ensuing forty plus minutes of pure and unadulterated heavy metal. It’s a perfect statement of intent and just ticks all the right boxes, with all cylinders firing by the time it reaches it’s final climax.

There are plenty of other high-octane rockers on offer, too. ‘Holy Terror’ complete with air raid intro, razor sharp riffing and a particular highlight being Rud Holohan’s driving bass line that keeps everything in check while pushing the track onward. ‘The Fear’ with it’s sinister stalker theme and sweet guitar melody during the lead break. In fact! All of Adrian Foley’s lead breaks and solos are used perfectly to accentuate each track, with every one having meaning and purpose within the track. And not just there to feed the fret dancing, shredders ego. That would have been too easy! ‘Out Of The Fire’ opens with it’s massive chorus, which is a great touch, but really takes off as they hit the second verse and the full band comes out swinging for the fences. It’s fist in the air, thumping, heavy metal at it’s best. And then there’s the JUDAS PRIEST worship of ‘Death Machine’. Three penalty points and an €80 speeding fine!!!! ‘Nuff said there!

Mick Mahon has truly excelled on “Nasty By Nature” and is every bit the embodiment of an 80’s metal singer. From that Blackie Lawless rasp that just screams ‘HEAVY FUCKING METAL’, to Kevin Dubrow’s conviction, to Steve Grimmet’s sonic wail. He’s captured all one would expect from a vocalist in this vein of metal. His delivery and range is fantastic throughout the entire album and is quite simply a joy to behold. As excellent as the music and production is, it almost certainly wouldn’t have had the same effect had a lesser vocalist been used. I can’t help but remember speaking to him earlier this year about when he joined the band and him saying, “All I want to do is play bass…”. Well! I seriously hope he’s reconsidered that statement at this stage because he’s propelled himself to the front of the class.

It’s not all full-tilt heavy metal thunder with STEREO NASTY, either. They take a slower, mid-paced approach with the likes of ‘Intersteller‘ and ‘In The Blood’. And it’s at these calmer tempos that you can really appreciate each members contribution, with both standout tracks being played to perfection. Foley’s guitars are pushed to the fore, and with good reason. They’re chunky… in your face… and full of grit, for want of a better word. And the deep drum tone used on ‘Interstellar’ is pure gold. And while initially ‘In The Blood’ seemed to be a bit restrained, once it takes hold, well… the title says it all, really. It goes from AC/DC to ACCEPT in the space of thirty seconds. But it’s the song’s chorus that’s the key. More than that, it’s the linchpin. And not just for the track itself, but the album as a whole. Most other bands would just sound clichéd, but the attitude and conviction exuded by STEREO NASTY just makes it work. It sums up the bands ideals and the entire album in a handful of words that are guaranteed to strike a chord with any and all metal fans, as well as undoubtedly becoming the bands live anthem for some time to come.

You have to hand it to them. STEREO NASTY, and primarily guitarist Adrian Foley, haven’t put a foot wrong in the build up to this albums release, keeping their cards close to their chests and with every aspect of it being considered. After listening to this album practically every day for the last couple of months now, it’s very hard to find any fault at all with “Nasty By Nature”. They have the music. They have the ability. They have the persona. And most important! They have the attitude. STEREO NASTY have not only channelled the feel and sound of the long past 80’s heavy metal movement they take influence from, but have completely embraced it and made it their own.

A vital edition to every Metal fan’s collection. Get it now!