Irish metal will will be amply represented in next years ‘Metal Magic Festival’ in Denmark. Taking place in Fredericia on July 7th to July 9th 2016. The Irish invasion will include PRIMORDIAL frontman, Alan Averill’s occult doom trio DREAD SOVEREIGN, along with two of our countries newest prospects and rising metal acts… VIRCOLAC, STEREO NASTY and ZOM who have only just been confirmed to play.

Dread Sovereign is the born dead brain child of Nemtheanga from Primordial. Years of string hacking and slashing on guitar have finally come to realization as backed by Dubh SOL (Primordial) on drums and Bones (Wizards of Firetop Mountain) on guitar they have forged a new band and recorded the bands debut “Pray To The Devil In Man” EP, which they followed up with the full length opus “All Hells Martyrs” in 2014.

The blueprint is rough, raw old school doom / metal which hails of Venom, Saint Vitus, Cirith Ungol and touches of late 80s early sepulchral black metal. Not intended to re-invent the wheel just to give it a good kicking in the true old evil metal fashion.

VIRCOLAC are an Irish metal super-group, of sorts! With members who have all served in various other notable bands down through the years. Darragh, the bands vocalist has been rooted in the Irish and international metal scenes since the 1990’s, running his own Invictus Productions label and was also vocalist for the mighty SOL AXIS. Necrohammer also served behind the kit with SOL AXIS as well as host of other bands such as CRUACHAN, DREAMSFEAR, KINGDOM and LUNAR GATE. Bassist Karen, also currently serves in the brilliant WIZARDS OF FIRETOP MOUNTAIN as well as CAT PISS BRAIN ROT and formerly DE NOVISSIMIS.  And the bands guitarist and main song writer, Jaime who has been involved with the likes of DRAINLAND, DE NOVISSIMIS, LURCH and too many others to list them all…

The bands debut “Codex Perfida” Demo was release towards the end of 2014. 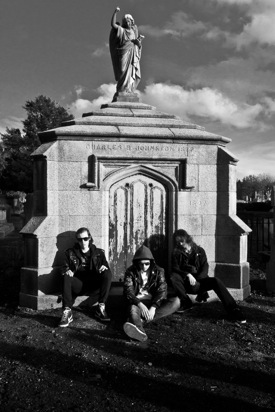 ZOM features members from CROWD CONTROL, WIZARDS OF FIRETOP MOUNTAIN and DE NOVISSIMIS. They released their debut demo in true old-school fashion on cassette through Ireland’s INVICTUS PRODUCTIONS just before the end of 2011. With a second and third run also issued, again through INVICTUS PRODUCTIONS. They also released the “Hells Pleasure MMXII” tape which features three unreleased studio tracks and was limited to fifty hand-numbered copies and was only available at the Hells Pleasure Festival 2012. And the “Multiversal Holocaust” 7inch vinyl through Iron Bonehead in 2013. Followed by their “Flesh Assimilation” album, through the same label in 2014.

Definitely a band to watch out for!!! The bands debut 10 track album “Nasty By Nature” is available now.