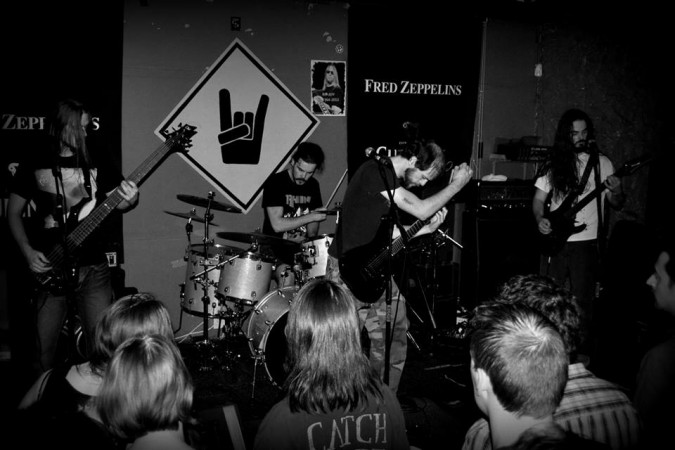 CORR MHÓNA from West Cork formed in 2008. The name, CORR MHÓNA, is the Irish word for heron, translating directly as “the twisted thing of the bog”. The band consists of two sets of brothers, the Quinns and the Farrows. And a session member, Ronan Hayes (BELINUS, WITCHAMMER, BRAINS, MOLDE) who fills in part time for live gigs or when one of the others can’t make a gig.

A rough demo called ‘An Chéad Thriail’ was recorded but not properly released. In 2009 their first official release, ‘Corrguíneacht EP’, was recorded at BPM Studios in Douglas, Cork. A solid enough effort. The songs are written well enough and competently played, and have enough variety in the riffs, tempos, instrumental breaks and even the use of some well placed samples to keep the listener intrigued. The clean vocals used fall short of the mark though and could do with more work. As much a production flaw than anything else. However! The death/black vocals are done well. The overall production isn’t the greatest and could be beefed-up to add more of a bite for any future releases. Something the music they play deserves. To these ears it just sounds a bit too safe at times. I’m not trying to sound harsh in my opinion. They’re definitely on to something “fairly” original. The groundwork is definitely there. But they need to build on it better than they have so far.

The one thing that definitely stands out the most is their vocals are all sung in Irish, “As Gaeilge”. Translations for their lyrics can be found in their CD inlay and also in their Bandcamp and Myspace blog. Definitely something that sets them apart from almost every other metal band.

They have played venues all over Ireland and shared the stage with bands such as FOR RUIN, BRIGANTIA, SIROCCO, WOUNDED KINGS, OLD CORPSE ROAD and slots at the SEIGE OF LIMERICK IV and London’s BURNT OFFERINGS FESTIVAL. I’ve been told by Paul Quinn that new material is written and they hope to record as soon as possible.