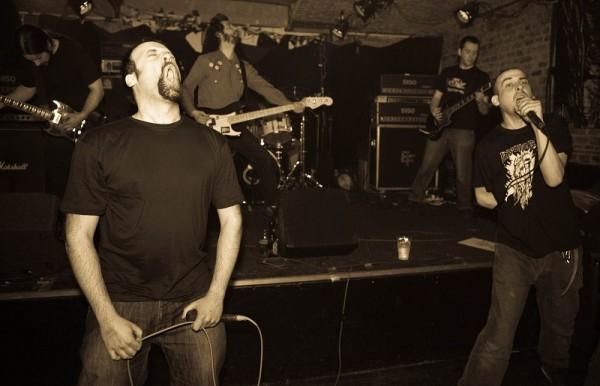 After the disbanding of Cork Hardcore band HALF-MAST, several of its members formed a new band in 2001 called [r]evolution of a sun. There have been a lot of band members come and go but the core line-up of Kenny, Noel, Christophe and Eoin have kept the [r]oas train rolling along for the last decoade or so.

They released their debut ‘Titan EP’ on New Years Day 2002. The follow-up release ‘Tokamac’ was released in 2005. And their third offering ‘Sacrificehellroutine’ was released in 2007, consisting of three tracks conjoined to form one almighty blow to the eardrums. All three of these EP’s have been made available by the band for completely FREE download at their bandcamp site. See links below.

Even though the band is a decade old and already have the three releases mention under their belts, they have finally released their debut full-length album ‘Hell’ this week through Irish Metal/Hardcore label UNDERGROUND MOVEMENT. And it’s about fucking time too.

* I think Mick and Noel switched from Bass to Guitars, and vice-versa, since the release of ‘Sacrificehellrout.
Apparently a fair few members have come and go from the [r]oas ranks. The ones listed above are all I know of for now. As I figure out who the others were, I’ll add them to the list.