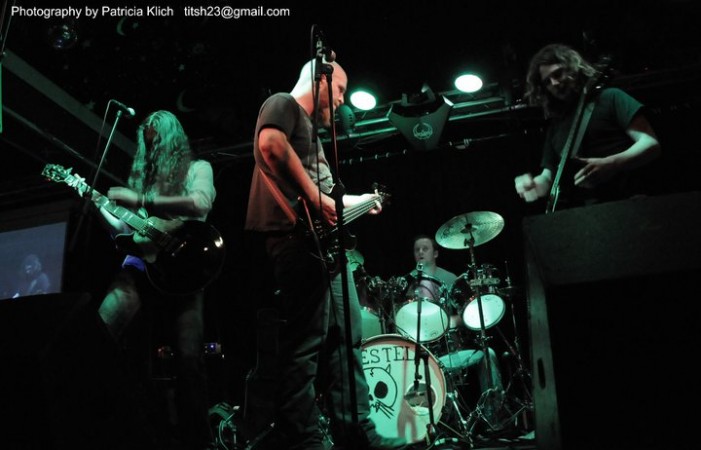 BRAINS was formed in 2009 and plays a blend of heavy doom/blues/rock. They are comprised of former members of a variety of bands ranging from Black Metal to psychadelic Blues creating a unique rocking sound. According to the band, BRAINS ultimate aim is to create serious, honest and dark Rock n Roll steeped in the influence of traditional rock arrangements, black metal atmospheres and psychedelic/stoner vibes. They are currently keeping themselves busy on the live circuit.

BRAINS released their debut demo, ‘Strange Meat’ in early 2010, which they also made available as a FREE download. It was also re-released as a limited edition 12″ vinyl by Kildare’s SARLACC PRODUCTIONS which included a bonus live track, ‘Thelema’.

October 2012 and the band have just released ‘Alchemy’. Another six tracks of honest, catchy dark rock. A definite step forward with the band expanding on the groundwork set out by their previous demo. There’s a fair bit of commercial appeal on offer, if only the mainstream media would open their eyes, ears and minds to bands like BRAINS. Lapot’s vocals have a great tone that lend brilliantly to the bands retro style of music. And there’s an excellent blue/hard rock quality to the rhythm and lead solos.

‘Eyes’ begins with a subtle bass intro that builds before the band opens up into the song proper. It’s a fairly restrained track that could have easily come across a lot heavier. But it’s not about the ‘heavy’ side of things with BRAINS. It’s about the ‘hook’ and the ‘groove’, which they’ve got going in spades. ‘Brown Jenkins’ follows with it’s brooding intro section and is a much more subdued track than the previous with great bass and guitar work right the way through. ‘Eclipse’ and title track ‘Alchemy’ are two catchy rock numbers that keep your foot tapping, head nodding and pens tapping (I’m at work listening and writing this… shhh!!!). On ‘Thelema’ the bands takes you on a slight detour. Still keeping their familiar style and groove but with a little more of rockier edge to the guitars. I even hear a little SOUNDGARDEN creeping through. And ‘Soil Creep’ closes the EP on a blues/rock high.

‘Alchemy’ is available now to download for free from BRAINS bandcamp. It has also been made available as a limited cassette which is again available from SARLACC PRODUCTIONS. Hopefully it will get another release on CD or maybe vinyl again like the first demo.The band also made two new tracks available for free limited download. The ‘Samhain’ outtakes were posted online on Thursday 25th October for one week only. They are outtake tracks from the ‘Alchemy’ sessions that didn’t make it onto the cassette release!