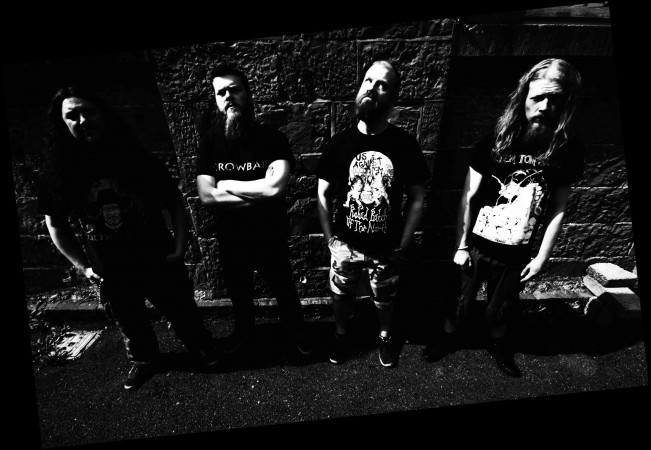 WEED PRIEST have already recorded their much anticipated second full length album. It is in the final stages of production at the moment and is due to come out as vinyl in 2017.

WEED PRIEST are a 3-piece from the west of Ireland, who initially began lurking about the Irish Metal Scene in 2008. Popping up on the bill for a number of gigs here and there! Recording and releasing tracks every once in a while online through their ReverbNation, Youtube and Facebook sites! The band consists of two Lithuanians, Adam on guitars/vocals and Ragas on bass, with Irishman Adrian originally occupying the drum stool.

“The Priest was invoked by his 3 acolytes on October 31st of 2008. After six eons of deep slumber He now once again roams the plain of mortals preaching the sermon of doom this world is yet to wake up to.”

They come across as being not too inclined to force themselves upon the public by conventional means! Now I’m not saying that’s a bad thing. It’s just that much like the music they produce, they’re more than happy to operate by trudging along at their own pace, oblivious to any outside influences. The songs they have available are all slow with plenty of low end bass and chock full of psychedelic Stoner/Doom riffs and solos! Each track was recorded during 2010 to 2011, either in Ennis or Galway during separate sessions at their rehearsal space or in Adrian’s home studio set-up. All were recorded live, mostly in one or two takes, but some are touched up with added guitar and vocal tracks where they felt it was needed.

About half of the online tracks clock in at between 10 and 20 minutes with a few breaking the 20 minute mark and the shortest tracks coming in at 7 minutes plus. So it can be a fairly arduous listen, but ultimately worthwhile for fans of slow Doom Metal. Three of these tracks were selected to be released on their 2011 “Demo” CD. The rest were re-worked and finally materialized on their full length self-titled album released on 25th February 2013 through HexenHaus. Album recording sessions were even made on occult dates in locations of spiritual significance.

In early 2014 Adrian left the band. A replacement drummer was found with along with Mícheál Ó Súilleabháin joining the band along with the addition of his brother Sean as a second guitarist. A couple of split releases followed in 2014 and 2015 with ASTRALNAUT and BLACK CAPRICORN. And the band released their second full length album “Consummate Darkness” on Halloween 2017 via Cursed Monk Records.