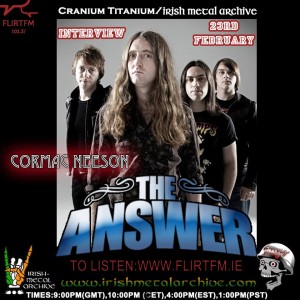 Trevor McCormack had Cormac Neeson from Northern Ireland rockers THE ANSWER on the phone for an interview on his ‘Cranium Titanium’ Metal Show on Monday the 23rd February 2015.

Skip to the 35min mark to hear Cormac give us the lowdown on THE ANSWER‘s upcoming new album, “Raise A Little Hell” and upcoming live dates and touring plans. There’s also one of the new album tracks ‘Red’ played on the show.

Other Irish related music on the show was the exclusive first airing of brand new tracks from Dublin’s ANTI-DOTES, and Galway bands KAMIKAZE and mighty doom lords WEED PRIEST.