Adoration of the glorious power of the riff.  A relationship between the bass and drums with one having a deep chug and the other an unholy thud.  A set of tortured and wailing vocals.  The lyrical stew of the occult and worldly darkness.  An appreciation of the sweet leaf.  All elements that help to make doom metal so great since the opening of BLACK SABBATH’s debut album.  True, many bands in the years since then have sought to streamline their sounds and content, but the essentials still remain.  Whether this be PENTAGRAM, LORD VICAR, SAINT VITUS, CANDLEMASS, REVEREND BIZARRE, COUNT RAVEN to MOURNFUL CONGREGATION, PARADISE LOST, CATHEDRAL, MY DYING BRIDE or ESOTERIC.  It has expanded into many different genres and countries beyond its original base.

We have not been impervious from its heavy reach either.  Classic bands such as THY SINISTER BLOOM, MOURNING BELOVETH, SCALD and others led the many for many to follow.  A rich tapestry of dark and bleak proponents exist at the moment.  And the west seems to be a particular hot bed of doom.  The likes of BRIGANTIA, CASTERO, ON PAIN OF DEATH, RITES, HARVESTER, and TEN TON SLUG are all testimony to this.  And it is from Galway that our subject emerges from the darkness.  Two Lithuanians (Adomas Trakumas on vocals and guitars and Ragas on bass) came together with Irishman Adrian ‘Elatha’ Healy on drums.  For a band of their nature, WEED PRIEST have an admirable work ethic so far.  They produced a highly regarded “Demo” in 2011, a debut full length self-titled album in 2013, the “Worship” EP in 2014 and split releases with ASTRALNAUT in 2015 and BLACK CAPRICORN in 2016.  Healy departed after the debut full-length album, but his mark was still present for the following EP, even though he had already been replaced by Michéal Ó’Súilleabháin at this point, with his brother, Séan Ó’Súilleabháin also joining the fold as a second guitarist.  Building up their live reputation supporting the likes of CHURCH OF MISERY, WOUNDED KINGS, HOODED PRIEST, HOUR OF 13, SLOMATICS and CONAN on tours and at Dublin Doom Day.  In between performing a double duty for the mighty slug, they set about to create their second album. 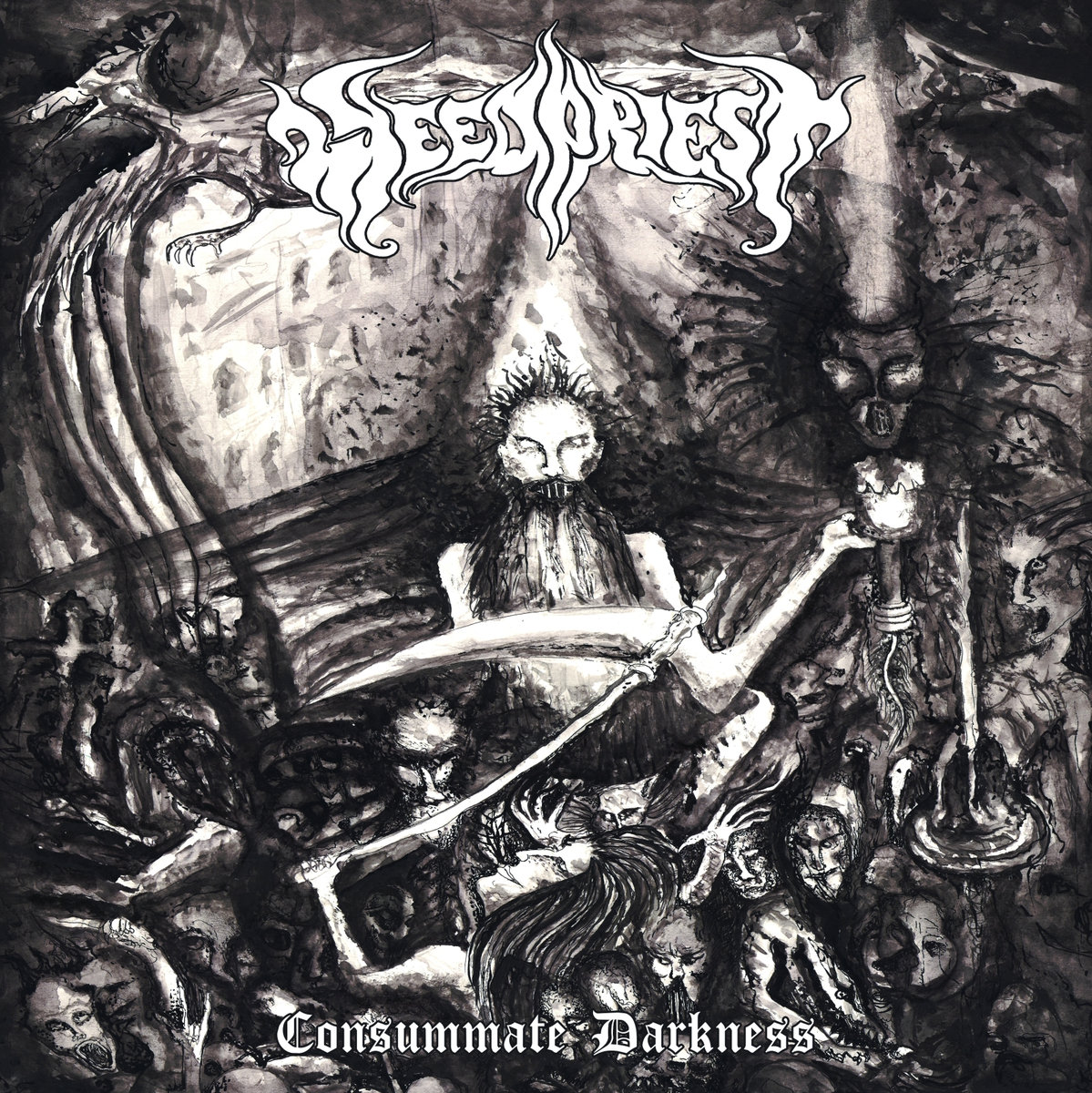 It all kicks off on ‘Witches Curse’, with an audio piece from one of the ultimate hammer horror movies, ‘Witchfinder General’… “‘The mark of Satan is upon them”. It leads into a low down and dirty guitar riff with plenty of weight and fuzz present. Then joined by the bass and drums rolling all over in their path. Curiously, the vocals from Trakumas seem to be quite low in the mix. Done deliberately? I don’t know. They are very much in the nature of sludge metal, possessing a deep snarl rather than an unearthly wail. The vocals drop away to allow for a gnarly guitar piece accompanied by the drums. They are solid and to the point. A few sweeps are thrown in for good measure. There is a slight air of repetition but it remains a decent piece. The vocals reappear and continue on in the same vein as before with almost a sense of black metal to them at times and the atmosphere contains an overwhelming air of menace and darkness to it. The playing drops to give space to a deep and thick solo before the drums come crashing in again. They are absolutely colossal in their power. Admirable work from Ó’ Súilleabháin as the new lad. Vocalisations are to be heard faintly in the background, almost inhuman in their sound. Another guitar solo breaks out from the crowd, slightly skewed and twisted in its nature but retains an epic feel to it. As it comes towards the end, a sound of burning and church bells can be heard. Perhaps the ultimate fate of the witch in question.

‘Vampyr’ sees another audio piece in the guise of Ronald Tapor’s unhinged performance in Werner Herzog’s ‘Nosferatu the Vampyre’.  This had been released as a preview to the album.  The playing sees low fuzzed guitars, chugging bass and slow, methodical drums making their presence felt.  It leads into a pretty groovy guitar solo.  The tempo might be low but the weight is definitely high.  The vocals appear and they are definitely on the heavier side of sludge.  Think ACID BATH, BUZZOV*EN, IRON MONKEY and so forth.  The solo again takes centre stage temporarily but all the playing is of a high quality.  Great crash and thump from the drums in particular.  The vocals remain at the point of tipping over.  They further enhance the filthy atmosphere on display here.  It breaks away to a wailing guitar piece along with the drums.  Great playing all the way to the end where the audio piece from the beginning is repeated again.  ‘Sky Daddy’ goes straight into a low, fuzzed guitars and drums led opening.  Major groove element again.  All the players lock into a jam before the vocals are introduced.  They are slightly low in the mix again.  They possess more of a gruff bark to them.  They drop off, the bass kicks in and the players kick off again.  All are on great form here.  The vocals begin to come harsher and more frenetic as the pace is stepped up.  After a while the pace slows down to the thick weight of the bass, the propulsive beat of the drums and feedback screams from the guitars.  The pattern is repeated from before but with a fantastic solo in its place.  The vocals emerge once more prior to a flat demonstration towards the end.

‘The Mass’ revisits the familiar fuzzed up tone on the opening.  Thick low-end bass adds to the feel of it.  Guitars come in and the weight is increased.  It is slow, pummeling and heady stuff.  Drums are slow, but precise.  Low growling marks the entrance of the vocals.  They are almost inaudible and comes across like a spirit in the midst of white noise, eventually coming more to the fore.  Possibly use of more than one voice to add power to them.  Great drumming on display again.  Not showy or flashy, but solid and dependable.  A few fills are showcased for good effect.  Vocals break through into a harsher and tougher growl than heard previously and would not be out of place in death/doom band for instance.  An audio piece is played as events fade away.  Just the occasional thrash of drums and guitars with a thick bass tone underneath.  It falls away to leave just the crash of drums, a melodious guitar solo and a throbbing bass.  All of which is played together superbly.  It eventually relents to the point where it is just the bass and drums mellowing quietly into the mist. 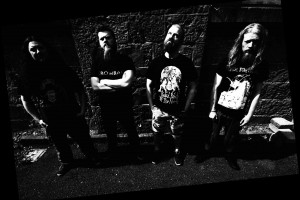 All in all, a highly impressive offering.  From checking out the song lengths, one might despair and assume they plod on longer than they should.  However, they don’t overstay their welcome.  On first listening, they positively zipped by in fact.  Perhaps some of the repetition could be removed to make it more dynamic sounding.  Not quite sure what the reasons for the vocals being so low down at times.  Whether it was a deliberate move on their part or not.  It does build on the promise shown in their previous releases however.  The acid test of a decent band is in the live arena and they certainly have been busy in this respect.  To mark the release, a series of shows were undertaken in Galway, Cork and Dublin, along with Ghoulstock in Belfast.  The future is bleak in the best possible sense.  “Consummate Darkness” was released on Samhain (31th of October) 2017 as vinyl, CD and digital via Cursed Monk Records.