Practice, a clear vision and time.  Three critical ingredients in order to make a great album.  The more effort one puts into honing your craft, the better it becomes.  A tight, precise and instinctive performance will always attract more supporters than one that is thrown together and lacking cohesion.  A band who knows what tone to incorporate, ideas to get across and a clear narrative throughout.  A confused and erratic story-line can often detract from the quality of the playing.  And of course time is a major factor.  The longer you spend working on your playing and themes you wish to incorporate, the better it will appear.  It may obviously be constrained due to outside factors but many bands are spending longer to get things right before releasing an offering.

And it is with this careful and meticulous approach that we discuss the band in question.  Owlcrusher have been a main-stay on the doom/sludge scene for quite some time.  Starting off as Dwell in Sun, a few demos were issued under that name but nothing since.  Having seen many contemporaries such as War Iron, Ten Ton Slug, Okus, and Nomadic Rituals all release highly praised numbers, many wondered whether anything was ever coming forth.  At various stages, people wondered if they were still a going concern.  It is, perhaps, expected for bands of this genre to take their time with matters.  There is the fear that other bands may push them aside.  You have to come back with a stormer in order to regain your ground.  What might be produced can often fail to live up to expectations.  To rush a release in order to make a deadline, can often make it sound unfinished and inconsistent.  The challenge stands ahead of them.

And oh Christ how they meet it headlong.  ‘Feeble Preacher’ incorporates a slow, wistful and elongated opening.  Instruments are almost non-existent, other than a mere flicker of sound effects in the background.  Hauntingly mournful cries can be faintly heard.  Like distant voices through a harsh winters fog.  All of this is building ominously for the assault to dismount.  A low and heavy riff fueled by feedback, along with slow, pounding drum-beats make their presence felt.  When Andrew Spiers’ vocals appear, they are of a raw and feral nature.  Bears much similarities to black metal ones.  Everything is slow, neolithic and devastatingly heavy.  Riffs seem to be drawn out for days and time seems to stand still between each drum hit.  The atmosphere remains utterly bleak and depressing.  A few slight increases in tempo can be found at certain stages.  A great riff in there classic doom nature shows up as the vocals get increasingly harsher.  Nudges it towards the territory of death/doom at times.  Mournful sounding backing vocals ads weight to the whole affair and contrasts well against the lead ones.  Given the low end nature of the music backing it up, one would assume that the band would have gone with a similar style of vocals as shown by bands such as Yob.  More of a bellow perhaps.  At times, they can appear to be more of a dressing rather than being part of the murky brew.  The drumming becomes looser and more fluid as the piece develops.  A few glacially heavy riffs shake things up and sees a return to the harsher vocals.  Events are switched up as a droney set are introduced.  A clear example of the levels of shade and darkness at their disposal.  They are not content to employ the same tone for the duration of the album as others might be tempted to.  There are plenty ideas going on here.  The vocals fall away to allow a stirring guitar solo from Damien McKeown, aided and abetted by the drums.  This is straight of the class of the likes of Esoteric.  A distortion, feedback rich ending brings it all to a wonderful climax.

Its title number employs a suitably devastating opening from the lads.  No waiting around here.  The levels of resonance and distortion coming out of the guitars is enough to level a skyscraper.  Consider the weight of bands such as Moss, Burning Witch and Munn.  It is a testimony to the production work done on the drums that every precise snare and beat can be heard.  Not fast by any stretch of the imagination but heavy as balls.  Obviously great understanding between the main players.  The collision is akin to a downtown battle between King Kong and Godzilla.  The drum beats are unrelenting in the background whilst a filthy riff peaks and troughs.  The Spiers’ vocals remain slightly ethereal to general proceedings elsewhere.  Almost floating on top of it at times.  Impressive displays of low end grit though in the middle section especially.  The drums and guitars lock together wonderfully yet again in a breakout solo section before diving right back down into the depths.  Another superb guitar driven piece almost rushes along at breakneck speed.  The playing gradually fades away to feedback and echo.

‘Spoiler’ contains a slow and dirty feel to the opening.  This compromises of thick, throbbing bass-lines, cascading drum-beats and multi-layered riffs being peeled off.  Fantastic drumming as per usual but it is a joy to hear the bass from Steve Hobson being given its chance to shine.  No doubt it would prove to be an immense live experience.  The vocals again prove to be more of a decoration again.  Not especially bad but slightly at odds with the feel of the piece.  Deeper vocals do appear but is rare apart.  It is, of course, well delivered but the listeners focus is concentrated on the playing.  It is a clear example of a band embracing the past with some of the riffs on display, yet being able to deliver something of their own.  One can’t help but to nod along with it.  An absolutely pummeling drums led section occurs around midway through.  The pace descends to that of a funeral march as sparce riffs can be faintly heard amid the haze and occasional vocalisations.  The drums reappear and events kick right back in again.  The stick work yet again is incredible.  All the players lock in together in a twisting and swirling melee of beats and riffs.  It contains perhaps the quickest tempo on show but keeps the weight nonetheless.

Although it has been quite a while in the preparation, the end results are more than worth it.  To the uninitiated, you would get the impression of a band from the US or elsewhere.  The attention to detail and crafting on show here is remarkable.  Not only for an debut album by an Irish band but an Irish band full-stop.  It may sound that I am picking on the vocals.  That is not the intention.  They are very well delivered in their own right.  I just feel that by one in one of two ways would benefit them more.  Comparisons will obviously be made between them and Soothsayer in terms of their musical styles.  The full-on frenzy delivered by Liam Hughes, along with Con Doyle’s mournful backing, fits it to an aplomb.  Perhaps by taking off the hand-brake, they would be able to embrace the utter filth of their musical offerings.  Alternatively, as suggested previously by using a greater level of low-end vocals.  I cannot say enough about the quality elsewhere.  The production work allows for all the small moments in the playing to shine through and fabulous artwork also. 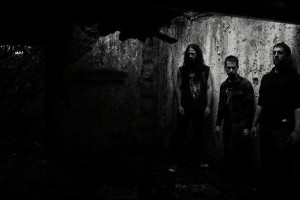 This has featured highly on many’s top albums of the year and it is clear to see why.  Their involvement in the ‘Altered States’ afforded them a wider exposure too. The band begun 2018 as support to Paradise Lost along with a mini-tour of England. They played Sweden’s Tribunal Vol on 1st  April with Bell Witch and Monarch, Walpurgis Night in Galway. At the end of the year, they released a cover version of Eyehategod’s ‘Shinobi’. This year begun with them playing The Output Belfast showcase. They are next scheduled to play at Crypt of the Riff III. Another album is on the books for them, hopefully this year. In the meantime, the future looks remarkably bright for them.  As Dale Cooper has taught us “The owls are not what they seem”.  There is certainly more to them than meets the eye.