WEED PRIEST’s debut album from early 2013 is easily one of my favourite local Irish releases from recent years. I’d previously been aware of the bands demos which had peaked my interests, but when the album dropped I was totally floored by it. So when this new EP landed in my lap, I’ll admit to being quite excited. Would it live up to the high expectations I had placed on it…??? Too bloody right it does! 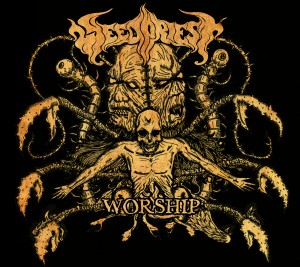 Earlier this year the original WEED PRIEST trio was cut back to duo. The loss of Adrian Healy on drums created a rather large vacuum to fill, as anyone who has seen the band live will agree. But Ragas and Adomas secured a new line-up, though! With brothers Michael and Sean Sullivan from fellow Galway Sludge band TEN TON SLUG joining the fold. A mutually beneficial arrangement, with Ragas and Adam returning the favour and helping to also completing the TEN TON SLUG line-up.

“Worship” is bands latest offering to the Doom masses. An EP of tracks that have been lurking in the shadows of the bands catalogue for the last few years in various stages of development. At least two of the tracks had been previously available in demo form back in 2012 before the album surfaced, so it’s great to finally see them get a proper release. They’ve been resurrected and given some finishing touches and now serve as closure to the bands early incarnation. An exorcism of old demons to harken the next the chapter of the band.

The first thing that becomes clear… This EP is a truly evil piece of work. ‘Ritual’ kicks things off with a simple riff that grooves along and immediately your head starts to nod along. The riff is carried through most of the track but doesn’t get tired or over-used, until they eventually slow things down in typical Doom fashion to finish. Every part of ‘Killvlad’ is dripping in the occult, from the crushing heaviness of the main riff and drumming, to the demonic envocation of the chorus. This track will surely level any venue when played live. And last but certainly not least! The near ten minute closing monster, ‘Possessed’. Complete with audio samples from the actual exorcism of Mary Ryan from 1996. A more diverse track than the first two, it’s the one that would sit best alongside the debut album.

WEED PRIEST are a band who have absolutely nailed their sound and don’t release anything until it is ready, 100% to their standards. And  “Worship” is no different. The band’s use of reverb and subtle vocal effects add more than enough to keep you involved throughout. My only gripe is that I’m left wanting for more… A sure sign of a killer band.

“Worship” is available to buy now from the WEED PRIEST bandcamp…