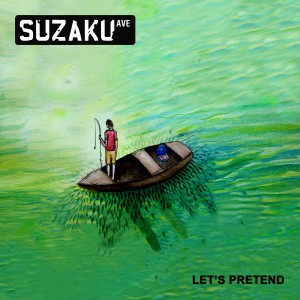 SUZAKU AVENUE are recent enough band to the scene that started around the beginning of 2011 from what I can gather. They recorded the ‘Let’s Pretend’ EP late in late 2013 to early 2014 and released it in March 2014. Although why they have classed it as an EP is beyond me? Fair enough it’s only got five track in total. But it’s over 42 minutes long… why not just call it an album?

Plus! They’re not your typical band at all. SUZAKU AVENUE definitely have their own identity and know how and what they want to sound like. Their take on Hardcore/Post Metal is quite unusual. The tracks are all quite long with plenty of signature changes throughout. And the clean vocals can be a little distracting at first but after a few listens they start to sink in and kinda works.

Not trying to be funny or anything! But overall it’s quite an odd ‘EP’ to get the head around. Not in a bad way, mind! Just that there’s a lot to take in while listening to it. But the production and low mixing really doesn’t do it any justice. They strike me as the types who want to keep it all as DIY as possible, which is fair enough! But they really need to think long and hard about how any future recordings are made.