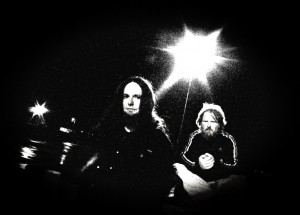 DÚNMHARÚ have been plugging away quietly in the background for a few years now with the first two albums, ‘October’ and ‘Cursus Come Home’, surfacing in early 2012. Very much Black Metal albums, the bands development between the two is quite obvious with the first being raw and traditional Black Metal sounding as opposed to the cleaner, more melodic elements being incorporated in the latter. Their next single ‘Of Yew Trees’ displays an even more drastic departure and is a very subdued and atmospheric track with almost Post Black Metal tones throughout. Yet this only hints at the direction the band were heading in for their next full-length ‘Frozen Eden’ which was released at the very end of 2013.

Which leads us to the bands latest effort, and as far as I can tell their only proper physical release, ‘The Light’. Without a doubt this is easily the bands best work to date. There’s far more than just Black Metal at work on this release. There’s elements of Post Black Metal that brings the likes of ALCEST to mind and the Doom/Death influences hinted at in the past are brought even more to the fore. In fact it has far more in common with Doom/Death than any other genre to these ears. There’s also a definite Irish atmosphere to the album with certain nods to PRIMORDIAL and MOURNING BELOVETH at times.

The Doom aspect is further heightened due to the fact that the album has only four tracks yet runs close to an hour in length. Opening track ‘Anguish In Their Calm’ starts off with the subtle sound of waves washing up on a shore before the first chords are struck and they begin their now familiar formula of melodic guitars with coarse Black vocals till about the five minute mark when the track moves towards an early ANATHEMA / PARADISE LOST style. ‘Haunted They Sing’ is similar again for the most part with a well placed acoustic passage in the latter half and a full on classic Doom outro section. 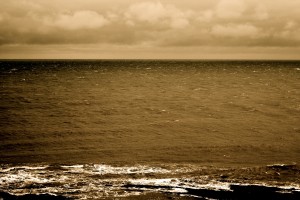 ‘Spectres’ is the shortest of the four tracks at over nine minutes. And is one of the more dynamic tracks with layered harsh Black/Death vocals being utilised over yet more acoustic guitars for the first half of the track before the standard electric guitars take over. It’s brilliantly done and really shows that the band aren’t just content with sticking to the tried and tested Metal standards and are thinking outside the box. The albums closer ‘Beneath The Waves, The Light’ is a seventeen minute journey that weaves through many different passages. Although it does tend to drag on little in parts, you know there’s always another twist around the corner to keep you interested and take you in a new direction.

Highly recommended for fans of Post Black Metal and Doom Death. I knew after one listen to this album on bandcamp that it was right up my street and bought it immediately. At €2 for a digital copy and only €5 for a CD it’s an absolute bargain. And while you’re at it check out their other albums available for ‘FREE’ or ‘NAME YOUR PRICE’ download.

If you’re checking out DÚNMHARÚ, then do yourself a favour and check out the members other bands, CRAFTY FUZZ and NAUTILUS.