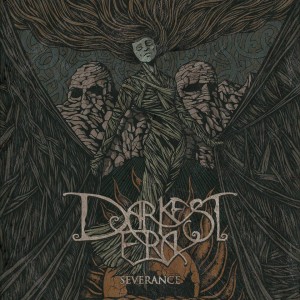 It’s been a long time coming, but finally Fermanagh’s finest DARKEST ERA have unveiled their sophomore album ‘Severance’. The album has been recorded for a almost a year now, but with both line-up and label changes, it’s only now seeing the light of day. But has it been worth the wait?… Bloody right, it has!

Opening track ‘Sorrow’s Boundless Realm’ was the first teaser in the run up to the full album release. A perfect opener that displays exactly what the band have in store for the rest of the album. The faster pace to parts of the song was a nice surprise and hints at a recurring aspect that runs pretty much throughout the length of the album. The next two tracks sees the band upping the gears a touch more. ‘Songs Of Gods And Men’ is another cracking tune with killer layered vocals during the chorus and brilliant lead and harmonised THIN LIZZY style guitar work. And ‘The Serpent And The Shadow’, albeit with a slightly misleading intro section, keeps the wheels turning at a pretty constant and rapid speed. It’s an absolute cracker of a tune with a fantastic tone to the bass guitars. It’s as thick as treacle and just as sweet. In fact everything about this track is bang on the money.

‘Beyond The Grey Veil’ is the centre-piece and easily THE standout track from this opus. It’s a much more subdued, yet very powerful and concise, track compared to the rest of the album with fantastic guitar harmonies and more superb vocals. It definitely shows how far the band has come in the last few years with regard to their song writing.

From here it’s another trio of faster numbers. ‘Trapped In The Hourglass’ was another preview track prior to the albums release. A very direct track that takes a well placed classic IRON MAIDEN twist towards the end. And  even more recent MAIDEN worship follows on ‘The Scavenger’. Penultimate number ‘A Thousand Screaming Souls’ sees the band let rip at full throttle again before settling back for the epic finale of ‘Blood, Sand And Stone’ to round out the album and probably the one track that sounds most like their earlier works.

It’s impossible to single out any one member or instrument as all parties have excelled themselves on this album. Ade Mulgrew and Sarah Wieghell seem to have a perfect relationship on guitars. Their song writing and guitar work was already great but has still come on leaps and bounds. And as mentioned before the bass tone on ‘Severence’ is fantastic and really shows how Daniel O’Toole has stepped up to the task. Lisa Howe may no longer be a member of the band but the her playing and drum sound achieved on this album is also superb and a vast step up from their previous releases. At times Krums vocals seem to be a little restrained, but with repeat listens it becomes more apparent that every note and lyric throughout is delivered with precision and intent.