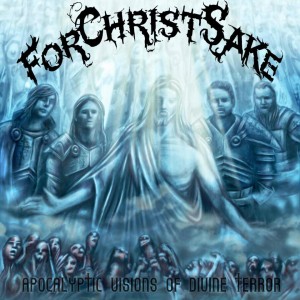 I was eagerly looking forward to hearing this latest release from Northern Ireland’s one and only Christain Death Metal outfit,  FORCHRISTSAKE. It certainly started off well with ‘Blackened Lands’ which has a great tempo to it. The drumming from Ignatios was a joy to listen to and with the combined attack of Simon and Ben up front, it had the makings of being a killer album.

However with 16 tracks on this release I feel the band have really out-stretched themselves. Keeping it to maybe just 10 or 11 tracks would have been a much better tactic, reducing the cluttered feel. Album closer ‘Dawn Of A New day’ in my opinion would have made one hell of an intro to kick off with. Not only to the open album with but also for live shows. The slow build up with strings… then hit us with ‘At The Gates Of Depravity’ to start the album proper.

I don’t know whether it was the production or a conscious decision by the band, but to create such a manic intro to the title track, ‘Apocalyptic Visions Of Divine Terror’, only made it feel like each member was fighting one another to be heard on what otherwise is a brilliant track.

These guys could be pretty big if given the right producer to work with, if they reign things in a bit and figure out exactly what sound they are trying to achieve.