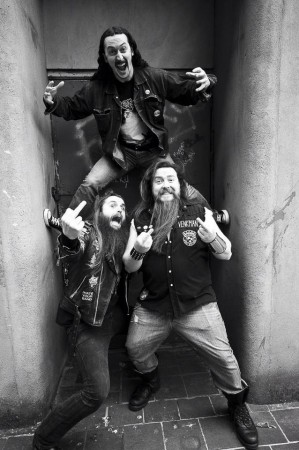 Fast, hard, heavy and with fury! Over the last several years Rabid Bitch Of The North have forced their way through a scene that has been dominated largely by bands at the extreme end of the metal spectrum. This has proven their determination and dedication to playing heavy metal in its purest form! After countless shows across their homeland, the band’s hard work was rewarded with support slots with the likes of heavy metal legends Hell, Blitzkrieg, Portrait and Pagan Altar. A steady rise in their profile since 2012 has saw them garner a healthy following of fans ranging from all age groups. This success culminated in an epic end of year show for 2013 in Belfast’s legendary Ulster Hall, where many a great before them had played. Bands such as Motorhead, WASP and Judas Priest had all walked the very boards that Rabid Bitch of the North had suddenly found themselves on.

2014 saw the band continue to grow in popularity with the release of their cassette single ‘Defending Two Castles’ which sold globally. The single received many great reviews for its “live in the rehearsal room” rawness and pure heavy metal spirit. Steady press coverage helped cement the bands growing reputation as a real, traditional heavy metal band completely devoid of any modern trends. The success of the single saw the band invited to play Ireland’s premiere Metal Festival Siege of Limerick quickly followed by an appearance at the UK’s Bloodstock Open Air and a well received support slot with Tim “Ripper” Owens (Judas Priest, Yngwie Malmsteen, Iced Earth).

Not resting on their laurels, a new year opened with a UK tour supporting Swedish heavy metal titans Portrait, a support slot with Angel Witch, another incendiary performance at Siege of Limerick, and the band’s first foray into mainland Europe! Further high profile supports came in the form of warming the stages for bands such as Diamond Head and Raven.

2016 saw the release of the ‘Green Eyes’ vinyl single and a compilation CD album of their entire back catalogue entitled From The Kennel To The Castle, released via Alone Records. A European tour scheduled later that year with Dutch metalheads Lord Voltare and further tours and festival appearances has saw this heavy metal trio move upwards and onwards onto bigger and better things. The horizon is looking good for Rabid Bitch Of The North, so strap in, hold tight and get ready for some heavy metal rabies!

Nothing But A Bitter Taste will be released on a limited edition gatefold 3 panel digipack via Hostile Media on 18th August 2017 as well as digital via iTunes, Spotify, etc.

A band who have carved their own path by gigging relentlessly, churning out high-octane classic metal in various formats and spreading ‘Heavy Metal Rabies’ wherever they go.

RBOTN are a three piece heavy metal band from Belfast Northern Ireland. They are very much inspired by traditional heavy metal bands and associate themselves with the NWOBHM and it’s descendants. The bands musical character and individuality is very important to their ethos and ultimately they aim to be themselves. They like to play fast, hard, heavy and with fury!