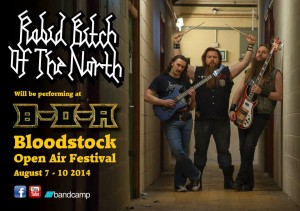 Northern Irish NWOBHM hallions RABID BITCH OF THE NORTH have announced that they will be playing at **Bloodstock Open Air Festival** in August, alongside fellow Irish representatives PRIMORDIAL and STORMZONE. A great score for the band who are sure to impress on stage at the event as they have been consistently doing to date, including a blinding performance at the last Siege Of Limerick.

“We were asked to join the bill over a month ago and can now finally announce our good news. We are ecstatic to be sharing the bill with legends like Saxon, Megadeth, Satan, Flotsam and Jetsam, Down, Obituary, Emperor, Carcass, Triptykon and Phil Campbell’s All Starr Band, to name but a few. More details of the event will be posted closer to the date!!”

RBOTN have been building up a great reputation since the release of their ‘Defending Two Castles’ cassette in February 2014 through Dublin’s Sarlacc Productions. The 1st ‘Gold’ pressing of the tape is already sold out and the 2nd ‘Silver’ edition is down to it’s last copies (single digits, so be quick!).