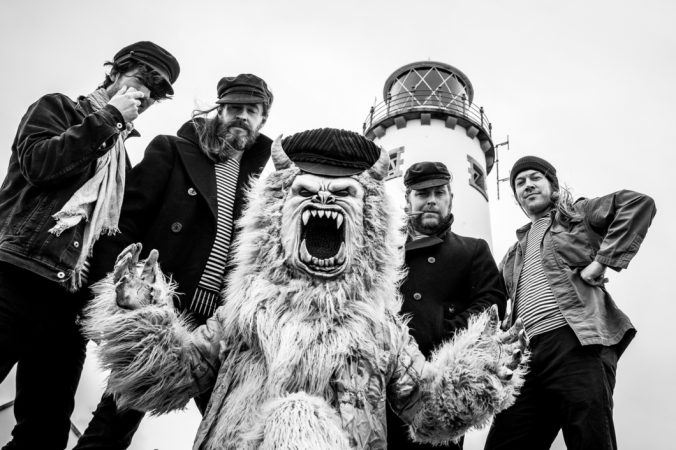 Gama Bomb’s lyrics often refer to the horror, action and science fiction movies, cartoons and computer games of the 1980s, as well as paying tribute to many classic heavy metal themes. They also write topical songs on social issues like racism and global warming. The band is known for injecting its own sense of humour into its lyrics, with bizarre song concepts which lampoon classic thrash metal topics. Recurrent themes to be found in Gama Bomb songs are cannibalism, war, zombies, human sacrifice, ghosts and murder.

FULL WIKIPEDIA PROFILE…
Beginnings: 2002-2005
School friends Joe McGuigan (bass guitar) and Philly Byrne (vocals) formed Gama Bomb with the guitarist Luke Graham in Newry in 2002 and soon built up a small but loyal following which they consolidated with a rigorous touring schedule and frequent forays into self-released recording. The band first gained attention with their demo “The Survival Option” in the same year. In 2003, they toured and released “The Fatal Mission” single. During this period Byrne often appeared on stage in fancy dress as a chef, priest, pirate or scientist in an increasingly colourful stage show which frequently included a thrash metal version of the theme tune from the 1980s TV show Teenage Mutant Ninja Turtles. Gama Bomb’s first tour dates outside Ireland were in 2004, supporting the punk band The Dangerfields on a tour of Scotland.

“Survival of the Fastest”: 2005-2007
Gama Bomb released their full-length album, Survival of the Fastest, through the European music label Witches Brew in early 2006. The album, which had originally been independently released in a limited edition format in late 2005, included many of the bands then live staples of which many, aside from those present on previous EP releases, had never been commercially available. At this point, the band’s line-up changed with the original guitarist Kevy Canavan leaving and the addition of drummer Paul Caffrey. In late 2005, Domo Dixon filled the vacant guitar spot. The 2006 version of the album features the bonus tracks “M.A.D.” and “The Survival Option” from their 2004 “Fatal Mission” single. In April 2006, as the album was released, Gama Bomb embarked on their first UK tour. The “Insane Quest for Flesh” tour had support from Mutant and Deceptor and is seen as a landmark event in the rise of the resurgent UK thrash scene.

“Zombi Brew” split 7″ EP
After live dates in summer 200, as well as coverage in music magazines like the NME and Terrorizer, Gama Bomb self-recorded a demo of their new album Citizen Brain to show to interested labels. Seeking a larger label to help them tour Europe, the demo did the rounds with most of the major metal labels. Around this point Earache Records began to take a serious interest in the band. In May 2007, Gama Bomb joined the Hungarian thrash band Black Sister on a split 7″ EP released by Problem? Records. The Gama Bomb side had new tracks “Zombi Brew” (from the Citizen Brain demo) and “Frightmare On Hell St.”, together with a cover of the punk band The Dangerfields’ song, “Maniac”. The EP was released exclusively on 7″ vinyl and limited to 200 copies.