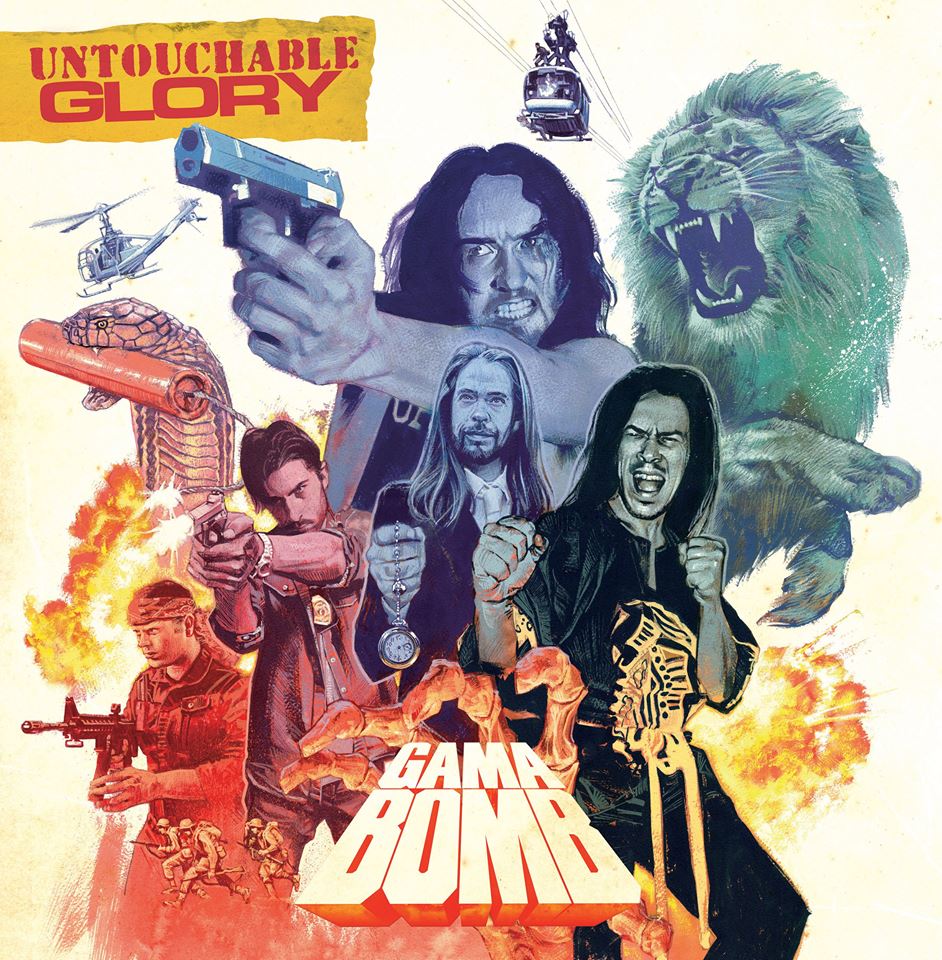 Once inside it can often be difficult to see. When you’re caught up in the endless heavy metal activity; the purchasing of records and the sporting of band t-shirts, it can be easy to forget that metal can be a little silly at times. Whether it’s the over the top sword swinging antics of classic acts like MANOWAR or the walls of black and white face paint worn by some black metal bands, the genre can inadvertently come across as a rather odd. However, Irish thrashers, GAMA BOMB, take great pride in embracing that silliness and bringing it to its extreme through intentionally hilarious lyrics and lightning fast music.

GAMA BOMB’s latest offering, “Untouchable Glory”, starts as it means to go on with a track that could instantly be recognised as a thrash anthem. ‘Ninja Untouchables / Untouchable Glory’ throws the listener in at the deep end, beginning with a straight forward chugging verse riff backed up by an array of 1970s styled martial arts grunts before exploding into a chanting chorus of “We’re untouchable!” The simplistic song structure, safe steady pacing and huge chorus make it evident that this track was designed for the live circuit as a gateway to both entertain and involve the audience early on. Littered with kung-fu movie references and funny one-liners like “Don’t touch me, I don’t know where you’ve been”, this opening track immediately earns itself a place among band’s ever growing arsenal of classics. When asked the reason behind record sporting a title track like ‘Ninja Untouchables / Untouchable Glory’, the first one in GAMA BOMB’s career, lead guitarist Domo Dixon told the Irish Metal Archive…

“It’s sort of like we’re bigging ourselves up, you know? But obviously we’re taking the piss out of ourselves too, so it just seemed to work.”

Although ‘Ninja…’ is no slouch, it’s still somewhat slower than what GAMA BOMB fans may be accustomed to. However, the tempo picks up on the following track, ‘Avenge Me!’, returning to the band’s signature brand of speed metal; a sound that’s ever present throughout the rest of the 30 minute album. As ‘Avenge Me!’ thunders through its ghostly tale, it’s also sprinkled with a few sparks of genius. The slight break at the chorus which threatens to slow down just for an instant before taking off at full speed once again is fantastically written and Philly Byrne’s rhythmic vocals during the middle eight sound like they might have a slight hint of hip-hop influence to them while simultaneously being reminiscent of Apocalypse 1997.

Although GAMA BOMB stick to their regular formula throughout the album, there are one of two moments which bring with them significant changes. ‘Tuck Your T-Shirt In’, for example, sports a thick bass and drum driven groove which runs uninterrupted by guitars throughout the track’s verses, pushing the sound further towards a pure punk experience. However, given how closely this five piece’s sound usually resides to punk, this really isn’t too much of a stretch, therefore it still fits perfectly among faster, more thrash orientated tracks, like ‘Ride the Night’ or ‘Raging Skies’. Speaking exclusively to the Irish Metal Archive, Dixon explains…

“This time around when we sat down to write it… We kind of went back and looked at old records, old Beatles records and stuff like that. And we said every song sort of has a different sort of signature, personality on all these old records we said we’d try and sort of inject that into the new album. Try and make every song, you know, kind of have a bit of character about it. So then we ended up with songs like Ninja Untouchables/Untouchable Glory and Tuck Your T-Shirt In which were kind of very different to what we’ve done before. So it’s still great Gama Bomb at the same time.”

Out of “Untouchable Glory”’s full 12 track assault, each song is a sharp punch of unadulterated speed metal. It’s fast, fun, and often completely insane. There isn’t a single dull moment here and although each song is great, there are a handful of tracks that really stand out from the crowd. ‘Witching Mania’ displays some fantastic double bass drum work from Paul Caffrey which completely fills the sound; giving it an extra sense of weight and density, propelling the passage to its apex to allow lead guitarist, Domo Dixon, to take over with another blistering solo. ‘I Will Haunt You’ wouldn’t feel out of place on their “Citizen Brain” album as the signature call-and-response vocal line creates another hugely memorable track, written in a similar style to ‘Zombie Blood Nightmare’. This, of course gives Byrne and bassist/backing vocalist, Joe McGuigan, the chance to inject even more humour into the track through these almost conversational pieces. ‘James Joints’ then captures that carefree atmosphere that has become a staple of the band since their “Survival of The Fastest” days. Tasting like a shot glass of metal; this track is clearly poured from the same bottle as the likes of ‘Curry Chip’, ‘Smoking the Blow with Willem Defoe’, and ‘OCP’. Even though the song only lasts for 58 seconds, it still manages to pack a ton of jokes, a fantastic tempo change and even a Nate Dogg reference. Dixon also adds…

“Well I’d say that’s probably the weirdest, most far out one that we have, I guess. So I’m most proud of that one, like. It’s pretty ridiculous. … Probably the most ridiculous song we’ve ever made!”

It would be easy to dismiss GAMA BOMB as a one trick pony or as a parody band, due to their constant barrage of humorous lyrics and retrospective pop culture references. However, the truth is that the song writing and musicianship present on their records is nothing short of amazing. This has been the norm throughout their last four records and this rule of thumb is reinforced, if not exceeded, on “Untouchable Glory”. They are the embodiment of fun, taking what is often a deadly serious sub-genre, seeing it for what it is and turning it on its head to fit their needs. No other band would get away with writing such well made thrash metal songs about Teenage Mutant Ninja Turtles, zombies and video games. This is a reason why GAMA BOMB are Ireland’s premier thrash metal act.

“Untouchable Glory” will be out on October 30th 2015
(CD and Gatefold Vinyl in Black, Purple, Pink and Yellow)
PRE-ORDER / BUY HERE…
http://promo.afm-records.de/gama_bomb/en.html