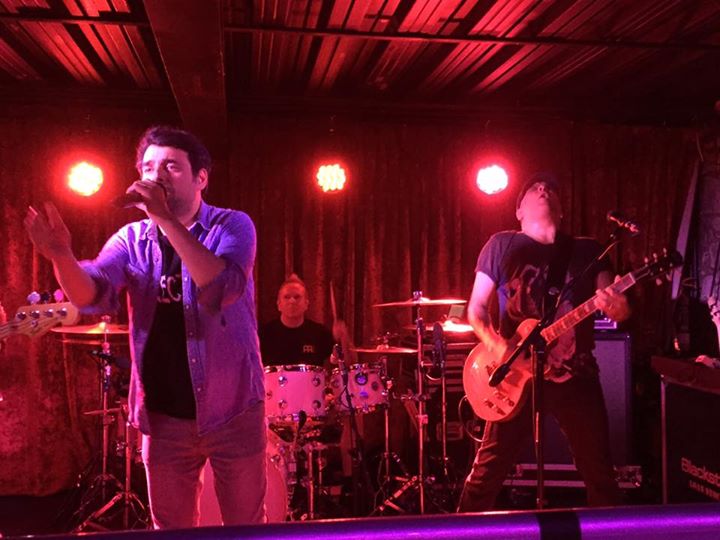 The Academy 2 seems such a weird venue for a band to play but it somehow suits the crowd tonight. Support act VUKOVI are a new act, hailing from Scotland, who are hard to pigeon hole, which is good. The singer Janine is full of energy tonight for their first ever Irish date. Her vocals are a breathe of fresh air in today’s over produced auto tuned acts, Janine has a range that would leave most so called artists today reaching for p45. The rest of the band just gel so well, sounding to me like a blend of JOY DIVISION and BLONDIE but yet infusing their own style into their influences. This band is surely going to go places and if their live performances keep up like this their own headline tour will soon beckon and hopefully their will be another Irish date involved.

It’s hard to believe that it’s been 20 years since GUN played here in support of “Gallus”. With many numerous band changes throughout the band’s history and a hiatus away it’s with great pleasure we welcome one of Scotland’s greatest rock acts back to our shores. With their new album “Frantic” to support, the guys wasted no time in kicking things off with a new track followed by classics from their first album “Better Days”. With Dante Gizzi on vocals now this band has a new lease of life and you can just tell that they are delighted that their fan base is still there singing every song. Jools is still a beast on the lead and with three new members, two Irish lads included, their is no stopping them. Yes they are known for ‘Word Up’, but let’s get something straight, the band is not just a one hit wonder and they prove it tonight, ‘Something To Believe In’, ‘Don’t Say It’s Over’, ‘Steal Your Fire’,

‘Welcome to The Real World’,  ‘Shame On You’, and the power ballad ‘Taking On The World’. The hits just keep coming, but this isn’t a nostalgic trip for them or us. This is us welcoming back one of THE best Scottish rock acts onto our shores. New single,  a cover of HOT CHOCOLATE‘s ‘Every 1’s A Winner’, was released in memory of their father to help raise money for cancer research.

It’s like they never been away and I for one am grateful of that because the Gizzi boys are full of antics tonight and even a quick side trip to a Police cover song ‘So Lonely’ just fitted the show.

When GUN return to these shores again – and hopefully it’s soon – do yourselves a favour and go check them out. It doesn’t matter if you don’t know the albums, you will after the show, these guys are one of those rare bands you wish you saw live and when you do, you wonder why you’ve never been a fan before. It’s been 22 years since I last saw GUN live supporting Def Leppard and I intend not to leave it that long again.