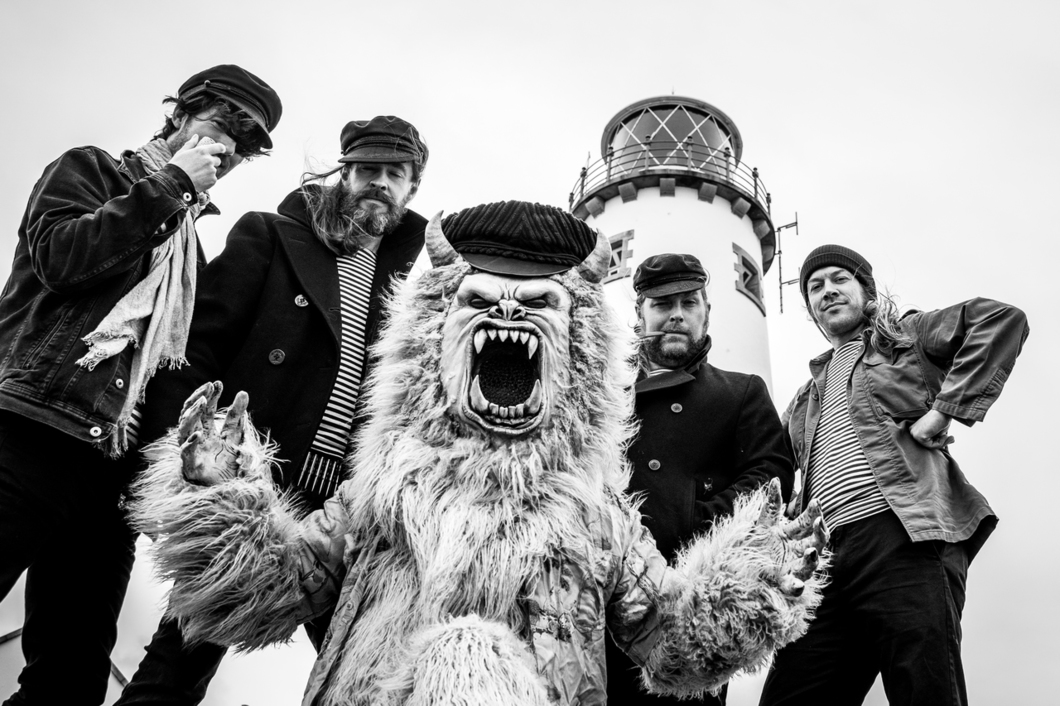 Having inked a deal with Los Angeles based Prosthetic Records, Irish thrashers, GAMA BOMB, return with a nautical-themed album that will surely be the soundtrack to the final months of 2020 for old school metal-lovers the globe over. Sea Savage will be released via Prosthetic Records on December 4th. A single of the same name will be released digitally tomorrow with an accompanying video available to view immediately. Pre-orders are live now for Sea Savage – click here for more info.

‘Sea Savage’ was shot on location at Fanad Head Lighthouse in County Donegal, with the permission of the Irish Lights Authority who maintain the working 19th century lighthouse, as well as in Newry, Northern Ireland and Omeath, County Louth, in September 2020. Set in 1900 and filmed in a real, working lighthouse, the epic, monochrome ‘silent film’ is the band’s most ambitious video yet.

“Over the past year, we’ve been obsessed with stories about the sea,” explains singer Philly Byrne. “Moby Dick, the mystery of the Franklin Expedition, the maritime stories of William Hope Hodgson and Poe, and movies like The Lighthouse – these things all came together to inspire the song, the album and the video for Sea Savage. It’s almost like fate – it was inevitable. The ‘Sea Savage’ video is our love letter to silent movies, and hopefully a way to finally rid ourselves of this fixation we’ve got with the ocean. In this video we find our intrepid heroes trapped in a 19th century lighthouse, their cognitive function blocked by foraged bottles of grog,” explains bassist Joe McGuigan. “Who will tend the wick as each fellow faces his uncertain end?”
“It also debuts our mascot Snowy’s new look – he’s had a bit of a makeover for the new album, and has grown up a lot,” says Philly. “With touring off the cards for now, it’s more important than ever for fans to have something to watch and enjoy – hopefully we’re giving them that, and then some.” 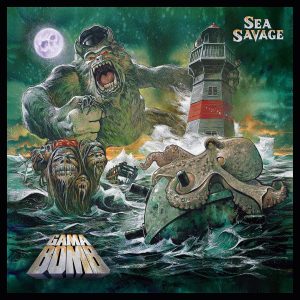 Inspired by Victorian horror and maritime adventures such as Moby Dick, the new album is presented as a 19th Century play, with Act One and Act Two playing out on side A and side B of the record respectively. The pelagic tale follows the crew of the steamer ‘S.S. Gama Bomb’ as they voyage in search of a real-life Yeti, only to go slowly mad on the high seas. It also features songs about 80s and 90s movies, because GAMA BOMB cannot help themselves.

“Sea Savage” was produced by the band’s own lead guitarist Domo Dixon, with the band members recording remotely in Dublin and Newry, Ireland, as well as London and Warsaw throughout spring and summer 2020. The album was then mixed and mastered by Zack Ohren (Testament, Carcass) in California, using analog ‘80s equipment to match the old-school metal vibe. The album is the band’s first since the departure of longtime drummer Paul Caffrey, seeing James Stewart (Vader, Decapitated) taking up the sticks and delivering a devastating performance, adding a technical ‘death-y’ edge to GAMA BOMB’s sound.

Inspired by the attitude and speed of classic Judas Priest, Iron Maiden and Accept rather than worshipping at the altar of old-school thrash, Sea Savage is a very different beast from their previous albums. GAMA BOMB have taken stylistic leaps with Sea Savage, which features both their slowest and their fastest song to date, and forays into classic metal and hard rock led by Philly Byrne’s gruff falsetto.