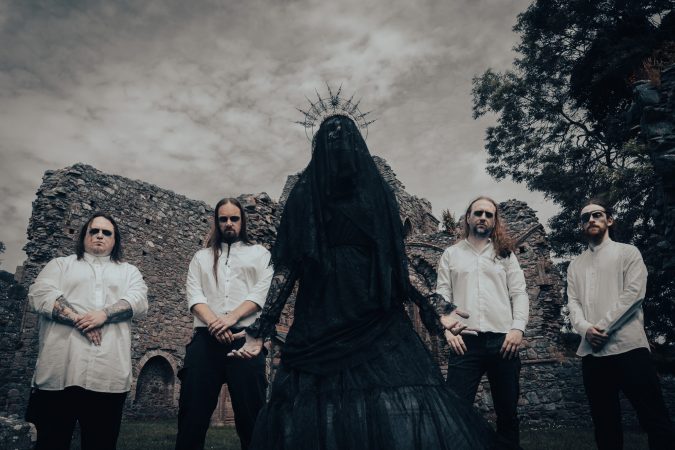 DRAKONIS of Northern Ireland, focus heavily on the “live spectacle”, blending a mixture of contemporary black and death metal, to create something without the limitations of one genre. Not wanting to work to a strict template, the band dips in and out of many styles to create music which is both atmospherically uplifting, yet devastatingly brutal.

Initially formed under the working title, “ORDER OF SHADOW”, DRAKONIS has been an ongoing project for several years. It was formed by Saul McMichael (guitars/vocals) and Gazz Murdock (bass) of the long running Northern Irish pagan metal band, WAYLANDER to explore a heavier and more extreme way of writing.

Soon after forming, Lee McCartney Joined the band on drums and took things to the next level. Not only with his break neck speed, but also with his desire to experiment wherever possible. Joining the ranks, long time friend and musician Tommy Hewitt took his role on second guitar as the band started test recording. Soon after, Gazz joined ALESTORM full time and had to leave the project. After which the role of bass guitar was filled by Stephenie Dickey. It was then decided that a standalone front man would strengthen the unit during live shows, letting Saul push the guitar work a lot further without splitting energies over both roles as vocalist and guitarist. Cass Cassidy filled this position with ease.

Over the years, DRAKONIS has brought not just extreme metal to the live circuit, but a highly visual experience. Armed with corpse paint, blood, skulls, spikes, chain mail and live samples, the band’s entire energy revolves around the live stage show, and will only grow in scale as the band evolves. They worked towards finding their own sound, test recording songs along the way. Not with the intention of release, but in a way to experiment and streamline their music, which let the band grow from what was once a simple black metal project, into something a lot heavier and more dynamic. Recording in Saul’s home studio throughout early 2015, the band wrote, recorded and mastered three new tracks, with the intention of sharing their music freely online, along with all previously recorded tracks thrown in as a bonus.

With these new tracks the band quickly caught the attention of the local scene, with their “Ravens Fuel The Sky” EP, which they used as a platform to release their follow up, “As They Rot”. This release was extremely well received by both fans and critics alike, placing it in several ‘Best of 2016’ lists, including winning ‘Uber Rocks International EP of the Year 2016’, tying with VOIVOD.