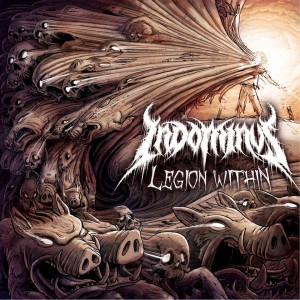 INDOMINUS are a recent addition to the Northern Ireland metal scene. Formed at the beginning of 2016, they didn’t waste any time in getting down to brass tacks and immediately set about getting this debut “Legion Within” EP together. Opening with ‘Leeches’, INDOMINUS set out of the stall with flurry of death metal riffs, double bass and layered gutteral vocals before settling into a catchy groove during the mid-section. It’s a solid statement of intent that bodes well for there rest of the EP.

And the quality doesn’t really dip throughout the rest of the EP. ‘Backbone’ and ‘Shadow’ are more straight up death metal numbers, not as frenzied as ‘Leeches’, but still have a few pacey faster sections to keep the listener on their toes. And the solo leads on ‘Shadow’ deserve to be singled out as they really add a nice element to the track.

‘Fragile Existence’ is a hard one to call. It a quick fire attack that starts off much in the same vain as ‘Leeches’ but quickly falls back into a safer mid-paced riff with accompanying double-bass. And then it just ends!!!! As if it was meant to continue into something bigger. It’s followed by the title track ‘Legion Within’, which is a decent closer and there’s nothing wrong with per say, but they just don’t sit right in the running order.

The overall production is pretty good. Although the drums and bass could do with being brought a little higher into the mix. And while there’s nothing new or groundbreaking on offer from INDOMINUS, what they do bring to the table is solid and consistent. A very enjoyable release from a band who are still in their infancy. Here’s hoping they can top it with their next effort. 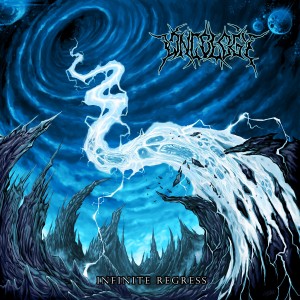 After parting ways with long-running death metal legends PUTREFY in 2014, Conor Brown and Aaron Rankin wasted no time hit the ground running with ONCOLOGY. Before the year was even out they had already released their first demo track ‘Prelude To Oblivion’ in late December, with the intention of attracting like minded musicians to join their cause. And only four months later issued their first official release, “The Metastasis” demo in April 2015, plus a stand alone free digital demo of their take on SUFFOCATION‘s ‘Infecting The Crypts’ the same week.

Trying to single out any one track in particular is a rather pointless task, as each one is as pummeling and vicious as the next. And at just over twenty-seven minutes it is a brilliantly focused and relatively short death metal affair. All three demo tracks have been re-worked along with five brand new cuts to inflict maximum aural damage. It is a pretty intense display from start to finish with non stop brutal death metal riffs and relentless guttural pig vocals from newest member Geoff Bradley.

There are a few well placed breaks from the norm, such as the unexpected drums and bass (not Drum’n’Bass) groove at the closing section to ‘Beheading Of The Prophets’ and the subtle interludes at the end of track such as ‘To Summon Pyriel’ and ‘Ascension Of The Parasite’ which give minimal respite to the savagery. Despite not yet having a live drummer, Connor Brown’s programming skills are in top form on “Infinte Regress”. In fact, you’d be hard pressed to even tell that the drums are programmed at all.

Fans of brutal death metal need to check this band and this album out immediately. 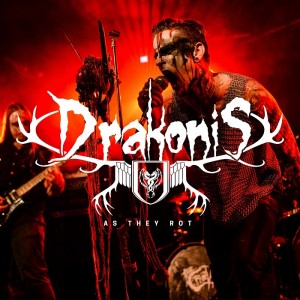 Already having released some earlier demo tracks under their former moniker ORDER OF SHADOW and their first official EP “Ravens Fuel The Sky”, DRAKONIS from Lisburn are now set to release their second “As They Rot” EP on the 28th October 2016. The band blend death metal and black metal, but lean more to the black metal side. And even though there are only three tracks on this release, the EP still clocks in at just under the twenty minute mark.

‘All Is Still’ opens on a quiet note before quickly blasting into a pretty tasty barrage of black metal guitars. The main riffs are nicely varied with their own little intricacies and subtle lead touches to keep the listener occupied. This is followed up with ‘Abundance Of Sin’ which basically continues the same formula as ‘All Is Still’. The riffs are again well considered and varied enough keep the track from getting stale and samey sounding.

Title track ‘As They Rot’ brings the EP to a close and with it a change of pace that gives guitars a little more room to breathe. It shows a slightly different side to the band who opt to take on more of a slow-to-mid paced blackened death metal attack. Although they do rip it up nicely for a time around the halfway mark.

Now I certainly wouldn’t be the biggest of black metal experts, but I’m reminded a little of DRAGONLORD, who I’ve always had a soft spot for, when listening to this EP. The production lends toward the EP being needed to be played quite loud to fully appreciate it. The vocals certainly live up to the black metal standard. And as with a lot of black metal releases, there are plenty of chainsaw riff and the bass and drums are kept a bit further back in the mix than the guitars and vocals.

Definitely a band who has piqued my interests of late and I’m very much looking forward to seeing how they develop they’re sound and style from here.