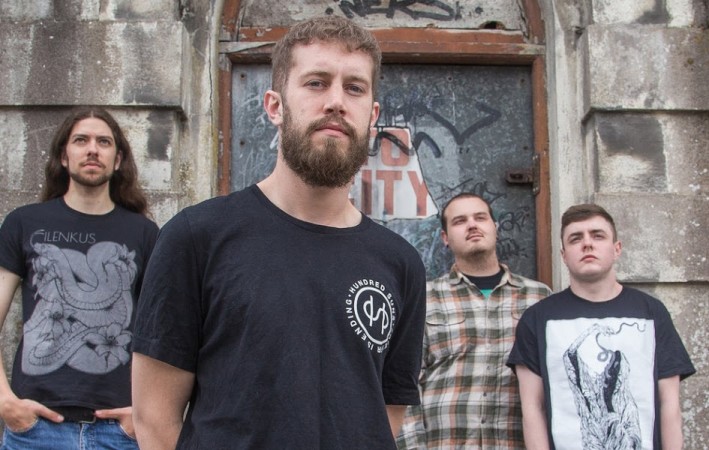 BAILER are a Cork based Hardcore/Alt/Metalcore outfit featuring former members from EMIGRA and THE GREAT OCEAN DIVIDE.

Two singles tracks were recorded in September 2014, with drums being done at the Nutshed Studio and everything else at Forbidden Zone Studio by MURDOCK‘s Aidan Cunningham. The tracks were released separately, with ‘Animosity’ being the first released on the 18th January 2015 and then ‘Call Of The Unknown’ the following May. The bands 4 track “Shaped By The Landscape” EP was then released in April 2016. With the physical CD version also featuring the two earlier single tracks as a bonus.

Ripping live shows over the years has garnered BAILER with highly respected reputation and has made them one of the more exciting Irish bands currently on the local scene. June 2017 saw them release the “PTSD” EP and more recently in February 2018 they released their self-titled “BAILER” EP through Distro-y Records and embarked on a Russian.

Heavy Irish metallic hardcore quartet BAILER take no prisoners with their brand new self-titled “BAILER” EP, due for release on 9th February 2018. Following on from 2017’s “PTSD” and 2016’s “Shaped By The Landscape”, BAILER is an ambitious collection of tracks that showcase a band who have truly discovered their sound.

Returning to work with MURDOCK’s Aidan Cunningham, BAILER is relentless from the get-go as the merciless ‘Lying For A Living’ brings the listener up to speed in a riotous fashion, while the likes of ‘Tuesday Blues’ and ‘Death Is A Reminder’ take a filthier route, hinting influences of CANCER BATS. Since forming in 2015 BAILER have pricked the ears of many other musicians, with some familiar faces lending their vocals to this latest EP. Adam Carroll of ZOAX, Xander Coughlan of WORN OUT, and Kevin ‘Lefty’ Letford of RED ENEMY all feature, adding their own slice of character to the record.

With a small discography the four-piece have impressively garnered attention from Metal Hammer, Kerrang! Radio presenter Alex Baker, Metal Injection and Heavy Blog Is Heavy, an achievement that is no mean feat for a band so early into their career. BAILER have spent their short time as a band building up a strong reputation in their home ground, having played shows alongside NORMA JEAN, SICK OF IT ALL, EMPLOYED TO SERVE, MURDOCK, RED ENEMY and more. 2018 will be the year that the quartet mark their territory further afield, with plans to tour Russia in February as well as more shows in the pipeline.