Hardcore is a genre that has undergone a substantial amount of changes over the years. Its original roots in the New York and San Francisco scene around the late 70’s and early 80’s provided punk with some of its most invigorating and exciting outfits and music. It eschewed the art school element of earlier punk in favour of aggression and violence. Speed and intensity was key. Think Fear, Dead Kennedy’s, Bad Brains, The Exploited, Black Flag, Minor Threat, Crass, Angry Samoans, Discharge and more. As the decade progressed, the metallic edge was heightened. It took on more of an influence from the thrash and cross-over scene. Originally known as Heavy Hardcore, it confusingly this also took on the title of hardcore. Having kicked off with bands such as Cro Mags, Madball, Earth Crisis, and Sick of it All, and Shai Hulud, it was the likes of Hatebreed and Biohazard who brought it out of the underground. Latterly, it has taken on all sorts of disparate elements though. Emotional, progressive and melodic aspects have all cropped up in latter day bands.

It is on more of the melodic strain of matters that we examine the latest EP release by Bailer. They are a recent enough arrival to the Cork scene, having formed in 2015. There is experience in their ranks however. David Cleere and Alex O’ Leary were band-mates together in the multi-cultural crew of Emigra. The former also plied his trade with instrumental crew, The Great Ocean Divide. So clearly there was a wealth of difference influences coming in with them upon forming the band. And they wasted no time in getting their name out there. Singles ‘Animosity’ and ‘Call of the Unknown’ arrived not long after formation. Their live debut came at Noisefest in February of that year with the likes of Ilenkus, Harboured, Murdock, and Here we Stand. They have since gone on to play with the likes of Horse, Obstacle, Red Enemy, No Spill Blood, Frustration, Bitch Falcon, Breed the Killers, Jenova, Ten Ton Slug, Axecatcher, Emigra, Megacone, The Magnapinna, We Come in Pieces and a whole lot more besides. A couple of Siege of Limerick appearances along the way. They also managed to share the stage with the likes of Norma Jean, Sick of it All, Orange Goblin, Esoteric and God Mother. During this spell two E.P’s were released to build up their reputation. ‘Shaped by the Landscape’ arrived in 2016, with ‘PTSD’ dropping in 2017. Expectations were, therefore, high ahead of this.

How does it match up though? ‘Lying For a Living’ kicks off with the sound of footsteps coming in and the crackle of guitar lines being opened up. O’ Leary’s vocals are at once, furious and uncompromising. The bass lines are strong and powerful, while the drums hammer away. This feature Xander Coughlan, previously of Emigra. Both vocalists gel with each other through the back and forth on show. Obviously someone they know well. The guitars from Chris Harte are marginally subdued but display little flashes here and there. They receive more of a chance to shine during the vocal spots and continues on in that vein as it develops on. There is a definite feel of Every Time I Die to it, albeit with more of a hardcore feeling. Sean Conway’s drumming throughout it all remains high. Heavy chugging shows up with killer beats over the vocals as it ends. ‘Tuesday Blues’ features no let up as it continues on in a similar fashion. It refers to the downbeat feeling one gets after a hectic weekend. Taking the good with the bad. The mean swagger in the intro collects together strong vocals over sturdy drumming and tight guitar lines. As it proceeds, a breakdown develops. The intensity is layered back in favour of groove and weight with significant emphasis placed on the bass and drums. A brief interlude leads into a deep bass solo by Cleere. The piece continues as it reverts back into the style from before. A few riffs emerge keeping the listeners attention. An instrumental segment between the vocals features some nice drum rolls along with catchy guitar lines. To credit them, they are not content to merely use atypical breakdown styling. The vocals develop a harsher air around the chorus with a real air of tension and spite. It almost resembles Obituary’s work on ‘World Demise’ at times.

‘Long Gone’ sees twisting and weaving guitars, solid drumming and firm bass-lines. They all combine well in a physical sounding opening. O’ Leary’s vocals retain their sense of fury and betrayal. As the energy lowers, it leads into another guest vocalist. This time is is Adam Carroll, formally of Zoax. He is more on the melodic side of matters. This is played out over some great licks by Harte and robust drumming. The main vocals return to add weight to the matters. It is full-on at this point, with some fantastic playing on show. It breaks into somewhat of a guitar solo, backed up by the drums. It is right back into the heft towards the end. Check out the video for it on their Facebook page. ‘Feel it More’ kicks off with discordant riffs and scatter shot beats. The vocals are on the harsher side of affairs. Aggression and belligerence are to the fore. A fantastic grinding bass line crops up underneath. This is before a few isolated breakdowns take place. Great drumming by Conway on show yet again. Feedback resonates towards the end. Both tracks were released as singles prior to this release. 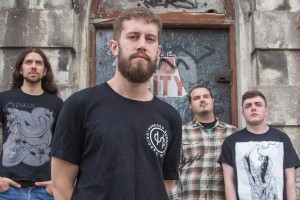 ‘Death is a Reminder’ contains a thumping drum beat to start with. It is complemented by a number of riffs being peeled off to give it weight and dimension. With a distinct air of unease. The pace is slower, even when the vocals show up. There is a mounting weight on the drums and bass as the overlying mood of irritation in the vocals builds up. Great playing from all concerned though. A massive emphasis is concentrated on the chug feel. The final guest vocalist shows up in the guise of Kevin Letford of Red Enemy. His appearance gives it more of a death metal feel. The sense of resentment and hostility is palpable. Just then, it kicks into a blistering section with all players on form. It has that authentic Hardcore/punk feel to it. Just in case anyone chanced to question them. This should silence any prospective doubters. Not just appropriating the likes of Cancer Bats, Rise Against or Gallows but content to go embark on their own path.

One aspect of the release is the massive production work done by Aidan Cunningham of Murdock. He has been in hugely in demand from a number of bands. Having being associated with the band throughout their brief career, he really helps the music to shine through. The guitar tone is massive throughout and combines weight and thrust with impressive clarity. The bass also is given its own room to breathe. It can be smothered by drums and guitars in other bands but not here. Some may quibble stating that such music should be more gritty and raw. To me, it gives full weight to the power of the music. Not to say the band is completely in thrall to studio wizardry. There is a spark and verve on display that shines through. Plenty of shades and ideas are on show. Not everything works but the willingness to take a chance is admirable. The infectious energy, songwriting ability and powerful delivery allows them their own identity. Are they in the same bracket as bands such as Converge, Dillinger Escape Plan, Your Demise or Botch? No. Are they highly promising and poised to step up a notch? Yes.

2018 remained an extremely busy year for them. A packed out show in the Poor Relation for Cosmonaut’s 1st birthday celebrations, a kicking performance for the Grasshopper Stake Park fundraiser, a truly mental tour in Russia and a tour of the UK with Sharkteeth Grinder, festivals like Townlands, Mammothfest, KnockanStockan and Dagda’s Eve, a fundraiser for Cork Simon, support to Palm Reader, Coilguns, Malevolence, Monuments and Shithatt, headlining at Fibbers, Sin E, Cleere’s Theatre, The Foundry and Dali. Already this year, they have played Dublin with God Alone, headlined Urban Assault, booked in to play Siege of Limerick and Crypt of the Riff, an Irish tour with Conjurer and a UK tour with Confronted, and supporting The Black Dahlia Murder. Look them up.