Bands are better when you know where they are coming from and what inspired them. Or at least that is what some might say. It is more straight forward when a band sounds like what they are listed as being. A thrash band will sound like a thrash band, a death metal band will encompass the classic traits of that genre, a black metal band similarly so. And you can apply that to various other genres as well depending on what the fans have expectations of. The development of metal over the last twenty years or so has led to a huge blurring of the lines however. Certain bands brought in aspects of other sounds for various different reasons, creating something new. Being surrounded by fans listening to bands from across musical spectrum’s, meant those were more likely to pull in disparate aspects. Reviews will list part of band type A, band type B and more. It will obviously work better for some bands than others. It can seam wonderfully or clash horribly. 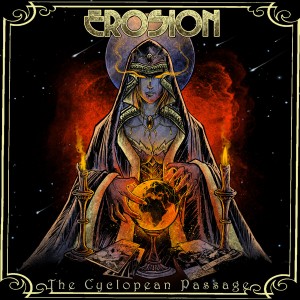 Our scene does not exist in isolation of course, and many bands here have melded varying styles. It certainly rings true of past outfits like SCALD, OGRE, THY SINISTER BLOOM and I’LL EAT YOUR FACE, to bands of today like YURT , IONA DEATH CULT, MEGACONE and GOD ALONE. All willing to subvert expectations and push the boat out. And it is with this sense of playfulness in mind that we introduce another new entrant in the guise of EROSION. Hailing from Belfast, they set forth in 2015. Essentially pegged as being an alternative band with thrash elements, they have been wowing live audiences since then. Starting off as a three-piece to record an EP, they soon incorporated Gavin Burnside on bass. They soon begun to play live, around Belfast mainly. They supported the likes of RABID BITCH OF THE NORTH, ASTRALNAUT, TWO TALES OF WOE, along with supporting international acts like LORD VOLTURE, WARRIOR SOUL and KADAVAR. They also competed in Bloodstock Metal to the Masses and Distortion Project’s 16th birthday. A similarly busy 2017 saw them compete in Bloodstock again and Bulleit Bourbon battle of the bands. And they released the “Gunslinger” EP around this time.

Much of the year was dedicated to the release of their debut album however. And it is one that has been much anticipated. ‘Tellurian’ opens with the crackled sound of a radio station being changed. A guitar line, low and subtle, is played against it. Riffing begins to emerge. It is swirling initially with a sense of feedback to it. Sticks tap, and the show commences. All players lock together well. Mark Stewart’s vocals crop up and they are generally of a woozy, stoned feel. Playing has more of an alternative nature to it. Perhaps SYSTEM OF A DOWN in places. The vocals develop a greater strength and power with energetic and reliable drumming. The vocals take on an air of menace and power to them with great playing in the background. A guitar piece by Martin Donaghy shoves its way forward. It is melodious, varied and expertly crafted. More melody in the vocals when they return. Great double work between the singing and his drumming. Another solo is backed up by the drums. Admirable range to the vocals as it fades out to the end. ‘Cast My Shadow’ arrives with short concentrated bursts of drumming and riffing. Great energy on show when it eventually kicks in. It really demonstrates the power of the vocals with great depth and power. Has a shade of darkness and sarcasm to it. Quite a lot happening.  It jumps into an almost thrash like segment which bears resemblance to ‘Ziltoid’ by DEVIN TOWNSEND. Drums hammer away with Gavin Burnside’s chugging bass and guitars. A series of lines spiral upwards showing plenty of ambition and invention. It slows down as the drums take on a heavier thud as a guitar soars overhead. The vocals are on the heavier end also. It sees a return to the more melodic vocals from before as it plays out to the end.

‘Giving All One’s Got (G.A.O.G)’ almost begins as a duel between guitars and drums with some lovely fluid playing on display. Nice basslines underneath. Vocals are more on the melodic side of affairs again. Impressive strength and range employed. Playing continues on in a similar vein for a while before a scattershot guitar breaks out against crashing drums. Definite power in those rushing lines over the vocals. It breaks down into a seriously heavy piece which is commendable from all concerned. This is book-ended by some melodic parts. Donaghy and Stephen Fleming lock together well. A fantastic varied solo breaks out but all are on form. Great drumming by Stewart to see it out. ‘Xenocide’ contains a strong guitar intro against strong drumming. It evolves into a blasting section with a full-blown guitar solo which is wonderfully over the top. Vocals are more of a power metal vibe to them. Serious weight on the guitars as it develops into a piece with high-class riffing and drumming. The vocals take on a proper sinister vibe to them. The drums crash against steadily frenetic guitar work. It goes all out with seriously mesmerising playing. Effects are applied to make seem slightly hazy. These fall away to reveal the band as they sounded at the start. Another solo breaks out, backed up by the drums and bass. These lines are repeated to the end. ‘Medicate My Head’ involves a slow and pensive intro with delicately played bass and guitars. They tease away at an increasing weight. It persists even upon the intro of the drums. Just shows it is not all about weight or speed. Some of the plucking patterns on show bring to mind ‘Floods’ by PANTERA actually. The vocals emerge and match the sedated mood. Sorry. A throbbing bass line from Burnside kicks in and the atmosphere changes. Heavier riffs and beats crop up. Vocals match suit but retain a melodic sensibility. This changes back down again before it gets increasingly frenzied. 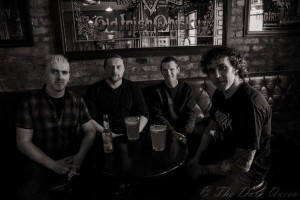 ‘Manic Smile’ sees a fast and aggressive opening with almost thrash like vocals. They have a crossover quality to them whilst the players hammer away. A few guitar squeals pre-empt a change in styles. It is more expansive and fleshed out rather than short, sharp barks. A few sweeps and squeals are unveiled along with a few chuggy moments. Very much in the groove metal territory. A tougher guitar line emerges and combines well with the drumming. The vocals change into more of a woozy style shrouded in fog. Along with great playing. It drops into an almost dream-like state before dashing back into a full frontal sci-fi thrash attack. ‘Gunslinger’ begins with slow and deliberate guitar sweeps accompanied by the drums. It leads into a strong segment with all players involved. A guitar line briefly dominates before the vocals arrive. It again shows the fullness of Stewart’s voice . Strength and melody in equal measures. Plenty on display in the playing again as it breaks into an instrumental piece. The vocals return temporarily before a piece which is frankly blistering. Special praise to the drumming. A few guitar lines break out and these are played against an acoustic one. It helps create somewhat of a middle-eastern feel with some interesting effects applied to the guitars. The drumming is on top form as a full-blown solo develops. The vocals are able to keep up with the action going on. Like Ronald Deschain, they shoot with their hand not their heart. ‘The Eclipsed’ is definitely on the slower and more introspective side. Donaghy employs his pedal board to create an effect akin to an organ which is a nice touch. A feedback laden guitar begins to take hold and it dives full-length into an instrumental segment with distinct nods towards Mastodon. The playing moves to the background as the vocals take hold. They have power but emotion also. The playing maintains that psychedelic tumbling ride in between. There is a lovely tone of the guitar with plenty of weight and fuzz. Some incredible lines and beats in an immense piece at the end.

‘Bleed Out’ contains another high-paced opening. It has the feel of a modern metal band such as AVENGED SEVENFOLD and the likes. Gets steadily more interesting as it develops. A whirlwind of riffs via Donaghy competes against a barrage of beats before coming together. A guitar line takes off and plays over the vocals which are somewhat lower in the mix. There are plenty of tricky little notes present. The vocals become harsher for the first time which is an interesting contrast. A distinctive chug in the bass mainly around the chorus parts. Substantial weight on the bass and drums prior to a solo bursting out. The mood gets hazier before a series of impassioned screams. ‘Death and the Maiden’ presents a dynamic and high-tempo intro with guitars and drums to the fore. A bass lick sees the vocals arrive. They are generally subtle but strong with playing over them. The guitars pre-empt a more powerful approach with very strong drumming. A mainly guitar driven instrumental piece develops before the tougher approach again. Some great riffing occurs before the harsher vocals crop up again. The playing slows down before one final flourish.

As a new band, and their debut album, this is highly impressive. They do probably lean towards the progressive side of matters but without some of the more overblown aspects of it. Plenty of variety is shown among the ten tracks included. On the most part, they are short and self-contained. Far too many bands are guilty of letting numbers meander beyond the point of interest. Perhaps some may look for more of the heavier elements that are hinted at. Only in the final two songs, does more extreme vocals begin to make itself known. It provides a decent contrast when set against the general tone. They might want to thread a balance between melody and weight.

Having not witnessed the band live to date, I am interested to see how Stewart deals with the drumming and vocal responsibilities. He handles the task well here, but it is a discussion which might want to arise in the future. Does the band choose to take on another vocalist or stick with what they have? Another decision has to be made on bass after Gavin Burnside stepped down. Martin Donaghy If it ain’t broke after all. The band has much on their plate going forward. They started the year with performing at RockTherapy’s NI Charity night with the likes of BALEFUL CREED, their own album launch with PERIAPT and repaying the favour for the latter’s EP launch. The cancellation of Rally of Lúgh LongArm denied them the opportunity to play to a wider audience. The next step forward will be back into the studio. Hopefully they will be able to expand on the promise shown here.