DARKEST HOUR rolled through Dublin last April as part of the incendiary tour package which included HAVOK, CEPHALIC CARNAGE and HARLOTT. It was an incredible and memorable night of metal, indeed. So much so that the Archives Philip Morrissey recently followed it up with a few words from DARKEST HOUR’s own Mike Schleibaum…

“The tour is over. It is only when you are home that you can reflect on it. But yeah, it was a good time. We made a lot of memories, you know?”

The words of Mike Schleibaum. He is at home unwinding upon returning from a recent tour of Europe. As a founder member of the Washington metal group, DARKEST HOUR, he is ideally placed to speak on a number of topics. Even the relatively early hour of the day on his side and the effects of jet-lag, fail to hide his sense of enthusiasm and vigor when speaking. The tour in question, was one the band have recently concluded. It took place over a number of weeks and featured many different countries. One of which was an Irish date in Voodoo Lounge on 24th April. He seemed delighted to been able to visit many places not normally done so. “It was great this time around that we were able to go to Ireland and Scotland. And those parts of the UK that we don’t normally get to visit. Usually it is like one London show and out again because you are trying to cover a lot of ground. That was one of the things that attracted us to doing the tour.”

For Irish fans, they were particularly ecstatic to be able to see the band in the flesh yet again. As alluded to, Ireland has not been a date on the touring schedule for them in quite some time. In fact, it was around fifteen years ago. Still in their early career, they took in shows in Limerick, Galway and I believe, Belfast. Indeed, the show at Sally Longs is available online. DAWNCORE and local bands such as STAND-UP GUY featured with them. As a band just beginning to find their feet at the time, and on one of their first ever European voyages, you could perhaps forgive the band for not giving it their all. Especially when you threw line-up complications into the mix. Those in attendance at those shows can testify otherwise. Surprisingly, his memories are still regarding those days. “When this guitar player quit on us, we were forced with the decision to keep on the tour even though we felt like we weren’t playing up to what we were used to. I remember just having a great time regardless because everybody just sucked it up. Even though we didn’t feel too good when we were playing, as soon as the shows were over, everyone really wanted to experience Ireland”. Playing with mainly hardcore and occasionally metalcore bands, amateur promoters and unusual venues certainly made for an interesting experience. “Yeah it was hard. It was punk. It wasn’t even metal. There was no light show. There was barely even any stage. We were mainly playing pubs that some of them had never had live bands before. It was DIY promoters that had put the shows on. It was definitely an experience that was cool to be connected to all of the people there. But at the same time, this recent show was much more enjoyable!”

This particular iteration brought together his band with headliners HAVOK, CEPHALIC CARNAGEe and HARLOTT. On first glance, it may have seen quite unique. Two thrash bands, a death/grind outfit and one playing predominately melodic death metal. The bands did not share the same genre across the board nor were they associated under a comparable label. So what, if anything, was the common element which brought all these bands together? “Well I think that the defining character was Nick. He is the bass player with HAVOK. He is also the bassist with CEPHALIC CARNAGE. Nick’s first ever tour he did was with CEPHALIC CARNAGE when they toured with DARKEST HOUR ten years ago. We did some tours with them in the U.S. and Nick was always talking about getting his fantasy… of getting everybody back for one more awesome run. He concocted the idea only this time it was better because we got the HAVOK guys along too.” He states his opposition to a label run tour and his desire to throw different sounds into the mix. “Well yeah. We never tour when there is a label deciding it. We have toured with HAVOK because it made sense. You want to tour with bands that you sound similar to but also those you are a little different from. Its not fun to hear the same stuff over and over again. To be honest, there isn’t that many bands playing the sort of New Wave of American Heavy Metal/Swedish worship/kind of Metalcore that we do! We just like to find any sort of bill that we fit into that is sort of Metal-ish.”

A recent US tour with the likes of RINGWORM, ROTTON SOUND, TOMBS and RIVERS OF NIHIL may have also made people raise an eyebrow regarding the varying styles and elements. As Mike reiterates, it is more related to personalities than styles of music. “We have had a good run of it lately. I think we have figured out how to make sure a tour is going to be good from the beginning by sussing out the ego level and deciding, “Okay, this is something we should get into”. Because we have been in situations in the past where things weren’t so accommodating for everyone. That’s just no fun being on a tour like that and having problems”. 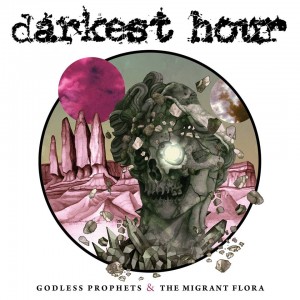 This tour does provide an opportunity for the band to perform a number of tracks from last year’s release of “Godless Prophets and the Migrant Flora”. Originally intended as a self-released and self-funded album, it was eventually released through Southern Lord Records. It garnered high praise upon dropping and featured in many top albums of the year lists. As with most musicians, he is never truly happy with something you produce. Perhaps you hear all the aspects you may have changed or slightly disappointed by sales figures. He qualifies that by the following: “…I think you have to learn how to enjoy your success or whatever little success you get. When I put it on and listen to the record, I am like “Dude, this album is awesome!” It has attitude and is killer. I mean, that’s all you can really bank on. All the other things that quantify success aren’t really important.” One of the guests featured, was former guitarist Kris Norris. I asked how it felt working directly with him again. “It was a very natural process. I feel like we have never stopped working together even though he may not have been involved with some of those other albums. We always talked and shared ideas. You know what I mean? He has just always been a force that has been around. Its not like once someone is out of the band, they are dead to you.”

Another name involved was that of Kurt Ballou of CONVERGE on production duties. Away from playing with his own band, he has been busy producing albums for bands such as NAILS. When pushed on his experience with the hardcore legend, Mike had this to say, “I think once you get to know him and appreciate that genius, you can appreciate the time and energy that this person is giving to this particular album. As soon as Kurt did that; as soon as he got involved, and creatively made a difference in some of the song writing aspects, we were hooked. He was one of the best, most organised, even keel producers we have ever worked with. And we have worked with a lot of really talented people. I think it says a lot about his professionalism.” The band themselves needed someone who could get the best sound out of the band as they could. The arrival of a high-strung individual determined to act the superstar and impose their styling on the band would not have worked. “We are at the point where nine albums in, we don’t do well with someone who wants to be the superstar. We need someone who can respect that we want to be the main voice. And I think Kurt really had his impulse on that. I think because of the fact that he was in a band that did that for so long. He had a good perspective on that.”  They are lucky to have worked with a few big names including Devin Townsend, Frederick Nordstrom and Peter Wichers. All this creativity has fed into their music. “We are like a sponge and we soak them all up. You know, all the people we work with and take a little piece of their style and put it into the sound.”

With the last album released, and this tour wrapped up, I checked to see what lay ahead of them now that they are home. It seems there is no rest for the wicked though. “Oh my God, its crazy! We’re just hustling away here. I am staring at a little recording of a song we were working on. I have a big list of things to sign off with from the last tour. We have a Japanese tour, a Canadian tour, an Australian tour, maybe some more US dates.” Being constantly busy can prove to be an issue for a lot of bands. Not so for DARKEST HOUR. They attribute their longevity to this. “We have been together for so long because we are always working on something and keeping ourselves entertained and creatively involved.” Not that it is all work related on the metal front however. “Oh yeah! Plus, we got to go see SLAYER this summer, got to go to see OZZY. There is a lot of concerts. It is going to be a busy summer when you get down to it if you are a lover of heavy metal.”

Away from the studio and stage, there is a particular activity close to the bands heart. Ice hockey, and particular, The Washington Capitals. They have reached the quarter-finals of the Stanley Cup for the first time in quite some time. The band have been making songs for the side and attending recent games. They are clear enthusiasts rather than recently discovering the sport. “When I was younger, and some of the other guys too, we were into hockey before music. It now provides a really nice hobby; a fun escape for when music gets too serious.” The swell of support and togetherness a run like this can provide to a community, helps to remind of their roots, friends and their state. “It’s a hometown thing. Maybe more of a Washington DC thing than being just an ice hockey thing. Its cool to tie yourself to something that’s happening in your home. When you are on tour all the time, you are just like never around. Its hard to keep your friends and keep them engaged. They are all like, “Oh he’s gone or about to go on tour again”. Rallying around something that is local is a lot of fun for us.”

I close up by wishing him the best and that it is not too long before his band return to these shores. In his words, “Hopefully it won’t be another ten or fifteen years again. Because I am going to be so old!”