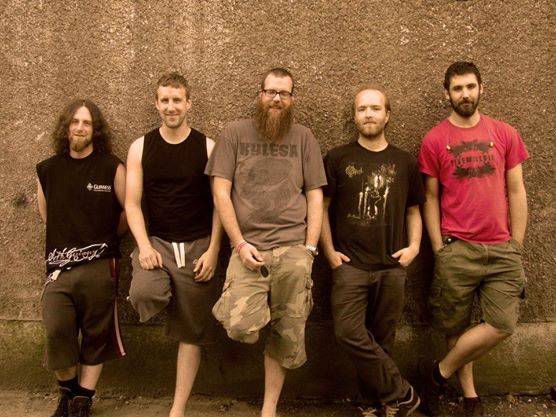 FIVE WILL DIE started out back in early 2005. And since then have pretty much laid waste to stages all over Cork City and any other town stupid enough host them. The line-up has changed a bit down the years but the general style and attack of the band hasn’t faltered a single inch. By 2006 the formidable Andy Forrestal was added to the line-up on vocals and the, eh…! colourful, ‘Bagacans’ Barry on bass… and the band recorded a four track demo, ‘Year Of The Dead’ in November that year.

Gigs! Gigs and more Gigs followed as the band built up a formidable reputation as one of the hardest working live bands on the Irish scene. August 2008 saw them record their first full-length ‘Slung From A Tree’ and more gigs including plenty of high profile slots ensued, along with visits to the UK alongside some prestigious support slots helped add to the bands growing profile. Their second album ‘Worth & Soul’ was released in late 2011.

By the middle of 2012 the band had to go on temporary hiatus as members were scattered across the Globe for a while. But come the start of 2013, with a slight personnel change, the band were back in action again. A couple of new tracks were recorded and a split release was planned during 2014, but delays meant it never materialised. So the band have decided to release their latest track, ‘Altar Of The Void’ on the Galway based ‘Cranium Titanium radio show‘. A video to go with the track was also in the works.

On the live stage FIVE WILL DIE were an unstoppable force. They played very fucking heavy!!!

After ten years of activity, FIVE WILL DIE announced their split in December 2014 with a final farewell show on the 20th February 2015. Core members Daniel Howard, Alex Hayes and Alan Setter set up PARTHOLÓN soon after with former INCISER bassist and frontman Dillon Bean for their next chapter.