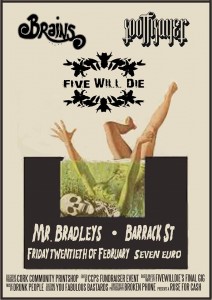 Sad news from Lee-side as Cork’s seemingly unstoppable juggernaut, the mighty FIVE WILL DIE, will soon be grinding to a halt, as announced in a brief New Years message through the bands facebook page…

“New years greetings to our fans, friends and fellow bands still stubborn enough to endure. We will soon be a decade old, a milestone that we will celebrate with the death of our endeavor. Embrace 2015 as the Year of the Dead!”

Not content with simply just slipping away without landing one last punch, FIVE WILL DIE will play their tenth anniversary and farewell gig in Mr. Bradley’s on Barrack Street, Cork on the 20th February 2015. Support on the night will come from fellow ‘Peoples Republic Of Cork’ comrades, BRAINS and SOOTHSAYER.

FIVE WILL DIE have always championed live music across a broad spectrum in Cork. So the gig will also act as a fundraising event for the Cork Community Print Shop, with all proceeds going directly towards the progression and improvement of the city’s local BYOB Music/Arts space. 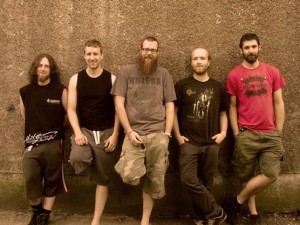 FIVE WILL DIE started out back in early 2005. And since then have pretty much laid waste to stages all over Cork City and any other town stupid enough host them. The line-up has changed down the years but the general style and attack of the band never faltered an inch. By November 2006 the band recorded a four track demo, “Year Of The Dead”.

The band built up a formidable reputation as one of the hardest working live bands on the Irish scene. August 2008 saw them record their first full-length “Slung From A Tree” and more gigs including plenty of high profile slots ensued, along with visits to the UK which helped add to the bands growing profile. Their second album “Worth & Soul” was released in late 2011.

New tracks were recorded and a split release planned during 2014, but delays meant it never materialised. So the band have decided to release their latest track, ‘Altar Of The Void’ on the ‘Cranium Titanium radio show‘.