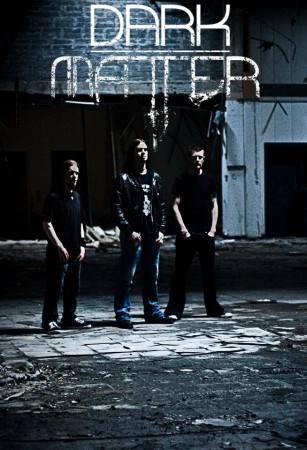 Formed from the remnants of two other very different bands, FULL SHRED and GIORA/TWILIGHT OF HARMONY, the Limerick based 3-piece instrumental band, DARK_MATTER, harness elements from various genres and come together as an ambient and atmospheric metal act. They decided to pursue a more experimental, instrumental direction instead incorporating atmospheric sound-scapes, as they felt that vocals tied them down.

They have play various gigs around the country alongside fellow Irish acts such as ZEALOT CULT and BRIGANTIA and have played a number of times at the SIEGE OF LIMERICK. And have supporting acts such as DARK FOREST and DIAMOND HEAD on the Irish legs of their tours.

They released their debut ‘_adrift_ EP’ towards the end of 2010, which includes three of their earliest songs plus a newer track. The EP was recorded and engineered by drummer Dave O’Dowd, with mixing done on a collaborative basis between the three members. This EP has a great proggy-ambient vibe running through it. Even though keyboards and synths are as heavily prominant as the standard guitars, bass and drums, they are essential to what the band are trying to achieve.

As of August 2011 Michael Lee has replace Mike Leonard on bass duties. He has previously written and recorded for his own solo project called FREQUENCY VOID, who have a couple of tracks online which you can check out at (http://www.frequencyvoid.com/). October 2012 saw the release of the bands debut full-length album, ‘A Place Of Memories And Ghosts’.