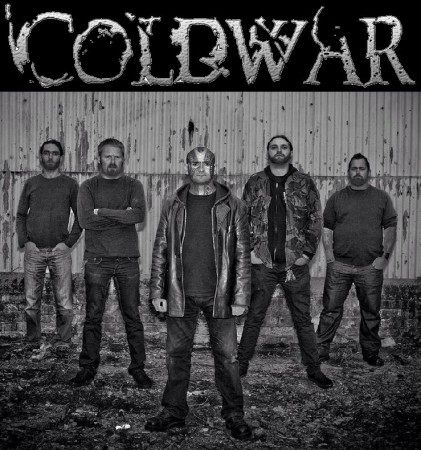 COLDWAR are one of the well established ‘Old Guard’ in the current Irish Metal scene. Starting out as a Hardcore/Punk band infused with a healthy dose of Metal, as can be heard on the demo and first album featured in full and for free download below. But as time passed, the band evolved into a vicious Hardcore infused Death Metal outfit.

Originally formed back in 1999 when Bernard “Brayo” Brady moved back to Ireland from the UK. He and Paul “Skinny” Kelly had got together and formed COLDWAR, with the intention of playing a hybrid mix of Metal, Punk and Hardcore. Soon after Skinny and Ian Lawless met up in a Wicklow pub and before the night was out he was offered the job as guitarist and the first full line-up was spawned into existence.

The trio set about gigging and rehearsing and in February 2001 recorded their ‘Gods Of War’ demo which was released soon after. Consisting of eight tracks and clocking in at a little over 20 minutes it packs a hefty Hardcore punch. And by the same time the following year they had bulked up the line-up with the addition of Paul Nash as a second guitarist and recorded their debut album, ‘Whore Bred & Hell Raised’.

The band went down a more Death Metal road after these two releases. Brayo left the group after the ‘Whore Bred…’ album. He was initially replaced by Paul’s former CLAY PIGEON bandmate, Gavin Burns, for about a year but the job eventually went to Marty McElhinney, who has remained to this day. Trevor McLave, who had previously been an an earlier band called STAGNATION with Skinny, was also enlisted as the bands new vocalist. It was this 5-piece line-up that recorded the 2004 release, ‘In The Suns Dead Rays’ through Ian’s UNDERGROUND MOVEMENT label. This line-up also recorded the 3-track ‘Promo 2006’ which was to be Ian’s final involvement as the bands guitarist as he had to leave the line-up due to personal commitments. His replacement was Bert Gore who recorded with the band for 2007’s ‘Bloodfire Sunset’.

Come 2009 and Eoin Broughal was now in the ranks. But the band were dealt a massive blow when founding member Paul “Skinny” Kelly sadly passed away. The band were obviously devastated. Not only was Skinny a founding member, but he was also the only remaining original member in the bands line-up at that time. It was ‘make or break’ for the remaining members, who eventually decided to carry on the bands legacy that Skinny had started a decade before, and Paul, Marty, Trevor and Eoin had contributed to and been a part of for almost as long. Continuing the more extreme direction the band had taken, they were joined by Andy Coade on bass and two years after the tragic loss, that incarnation of COLDWAR released the opus, “Christus Deathshead” in 2011, which was self-released by the band and distributed through Code-7.

Live the band made very successful appearances at Dublin’s Filthfest, Cork’s Burning Oak Fest and the Siege Of Limerick, as well as the upcoming Subvert Fest in Bristol. They have toured the UK, Europe and the US and have shared stages and bills with a huge list of bands, which highlights include PRIMORDIAL, THE EXPLOITED, ANTHRAX, DISCHARGE, ABADDON INCARNATE, AGNOSTIC FRONT, HATEBREED and many more to boot.

2012 saw the band still rolling forward. Eoin was replaced temporarily at the end of 2011 by Domonic McMahon on guitars but has since rejoined the fold. But by the end of 2013 Eoin has again dropped out and has now been replaced by Dave Greene, who is also a member of Black Metallers WOUND UPON WOUND. And work began on the bands next album, ‘Pantheist’.

One demo track was released early on through the bands Youtube and Soundcloud sites and also on the Irish Metal Archive’s free download compilation album “The First Wave…” in 2013. The track is called ‘Last Days Of The 4th Sun’ and showcases the band firing on all cylinders with one of the more diverse offerings the band have penned. And come April 2014, “Pantheist” was finally released to unanimous praise from all corners of the Metal World.

On January 10th 2016, COLDWAR announced their break-up via a message on the bands facebook page.