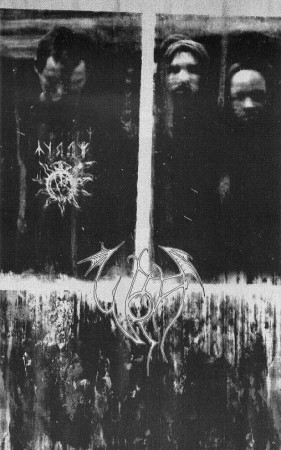 “WOTH malformed in the sublime, barren month of January 2004 with a unified goal to create utterly extreme, horribly heavy, sewage laden – manky as be fucked filthy anti-music that sounds like its rotting apart. After much jammage we recorded our first four track demo titled ‘Terminal Dirge’ in June. This debut release was very well received by the underground and awarded album of the month on metalireland.com as well as getting an 8.5 mark in Terrorizer magazine.

A year later after a heap more jammage we recorded our second demo ‘Eulogy for the Sewer Dwellers’ which is slower, darker and mankier and was not as well received. We were amused. This also achieved an 8.5 mark in Terrorizer magazine. In 2005 we played numerous gigs in places such as Dublin, Belfast, and Cork and went on a mini tour with the ridicuolusly heavy THEE PLAGUE OF GENTLEMEN (Belgium) and OFFIUM TRISTE (Holland). In July 2005 we played at the Irish Metal Fest ‘Day of Darkness’ with bands such as MOURNING BELOVETH, PRIMAL DAWN, DESASTER & ROTTING CHRIST. We also played at the Doom101 Fest in Cork alongside many savage doom acts such as BLACK SUN, SLOMATICS, SERPENTS, DE NOVISSIMUS.

In October the Hesperus sailed to foreign shores and played at the Dutch Doom Day in Rotterdam with fellow Irish doomsters MOURNING BELOVETH, as well as bands such as METHODRONE and NADJA. Overall this was a great experience and our rotten set supposedly drove many punters out the door which meant that our mission was a success. Needless to say we drank and smoked ourselves into a pitiful state (except for the Count who remained stone cold sober).

In November 2005 we had the privilege of supporting very well renowned, extremely fucked up New York doom band KHANATE in Dublin. That same month an exclusive track titled ‘Utter Rot’ by WOTH was released on an Israeli doom compilation called ‘Asymetry’ featuring various doom bands from around the world. Our next gig was at the annual Yueltide Metal Festival in Belfast in January 2006.

After wallowing in long lengths of misery which involved continuous jammage, shite talk and sangwedge ateing we recorded our debut album in March 2006 titled ‘The Sunken Threshold’. This consists of three tracks, has a running time of over 42 minutes and is possibly our foulest release yet. It was releases in October 2006. Akin to a cavity block fucked into a tank of sewage its jagged ripples will spread across the universe resulting in quicker decomposition for all. God will weep in his hanky and Satan will cackle manically in his deckchair. On the 13th of May 2006 WOTH had the supreme pleasure of supporting the very legendary Finnish doom band REVEREND BIZARRE in The Temple in Dublin. It was a legendary night, a legendary gig and all in all the whole thing was very fucken legendary.

After an almost year long grisly and horribly unsettling silence the creaking wheels of WOTH were set in motion again in September 2007. We are are back jamming again and our crazed desire to compose nothing but raw, despicable, blackened filth is as strong as ever. We’re busy writing new music for various splits as well as for our next full length album. WOTH played with MAYHEM and ALTAR OF PLAGUES November 29th 2007 in The Button Factory in Dublin. Overall it was a post sub-molecular, deeply cryptic, anti-biblical experience. In the second half of 2008 a two sided cassette titled, ‘The Dilapidated Sky’ was released by Bubonic Productions in Portugal. It’s a deeply distressing and irritating noise/filth/horror experience that will assuredly render you brain caked in a scum the likes of which no wire brush will scrape clear. Only 200 copies were stillborn.

In November 2008 the LP version of our 2006 debut album ‘The Sunken Threshold’ was released by Streaks Records. The LP features brand new artwork courtesy of Glyn Smith. In the same month the WOTH split 10″ with DE NOVISSIMIS (a dangerous rabble of unwieldy Irish punks who churn out cattle flattening, beyond crusty, illegally heavy doom) was also released courtesy of Stitchy Press. On November 29th WOTH shared a stage with NADJA and NEGURA BUNGET in Fibbers Magees, Dublin. In 2010 there was a little ripple in the scummy pond of general WOTH inactivity. A rotten hunk of flesh was calved from the hulking mass of ignorance under the name of ‘Dungeon Floor’. Luckily there were very few people harmed in the fleshy landslide. A split 10″ was released like a greasy fart into the otherwise peaceful atmosphere with fellow Irish mongos MOURNING BELOVETH. A few more people were harmed and we didn’t care and we still don’t. A new album is on the way and it won’t be clever and it will mangle braincells and we hope yours will be among the casualties.”

And as of May 2014, WOTH have slithered back into the Banagher Caves in Offaly to envoke and cast forth their third, as yet untitled, full-length album. Whatever abortion the recording sessions produce… It’s pretty much guaranteed to twist and dement the minds of any unprepared and unfamiliar listeners. And in yet more acts of foulness and sickness, Fort Evil Fruit will have two more compilation tapes cast out in 2014 consisting of all the bands non-album leftovers and scraps that even the band themselves felt were unfit for full proper releases. The first of these excretions is tiled ‘Long Stereak Of Misery’.  (more info here)…

May all the Gods have mercy on us!